We had a very easy and flat day ahead of us. Our friend, Leonie, who we meet in Vietnam, generously invited us to stay at her flat for a few days and we were meeting up with her in town. The ride into Amsterdam was uneventful. The clouds were low, but the rain held off. We spotted an interesting shaped feature, like a flower or sun, on our GPS road map and made sure our route took us by it. We were hoping for some sort of castle, but it ended up being a small, crowded village surrounded by a star shaped moat. It was cooler looking on the map…

The remainder of the ride was through the usual urban sprawl so we just cruised. Plus, we were eager to see our friend. We meet up with Leonie on the corner of a busy intersection and decided to go back to her flat to drop off our panniers. We had a coffee and caught up on what had been going on since we last saw her, then it was time for a tour of the city by bicycle, of course.

Amsterdam is a charming city. It felt like the first quintessential European city we had encountered. There were old buildings, canals and lots of glamorous people drinking in the sun at small cafés. Many of the buildings were more than 500 years old and because of differential settlement in their foundations, some were tipping precariously or had waves in what had originally been horizontal rows of stone in their facades.

Leonie took us around to get oriented and give us an idea of what was to come. She also insisted we try some hot vending machine food. What?? For a Euro each, we got meat and vegetarian croquettes. They were quite tasty, despite coming out of a weird little door. 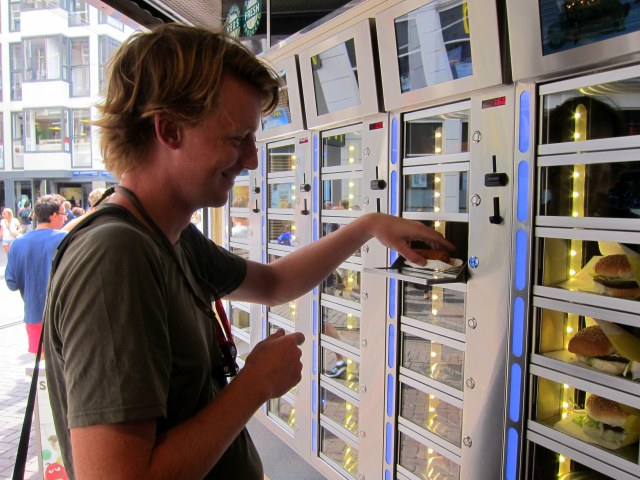 Leonie had a work BBQ to attend, so we parted ways before dinner. We spent the rest of the night wandering and of course went on a meander through the red light district, but opted to not take pictures. It was definitely an experience, and we’ll leave it at that.

2 comments on “The big city”