We slept in, woke to blue skies and had a leisurely breakfast. Our campground had a great play area for kids including a giant trampoline and seesaw. I did enjoy the trampoline, but we were intrigued by a large contraption which looked like it was for older children. Basically, we held onto ropes on opposite side of each other and ran in a circle until we were picked up off the ground. It was ridiculously fun, but quite a workout to hold onto the rope. Good thing we had gloves.

After the excitement of the ride, we were on our way. Our route to Amsterdam started with a ferry ride. This ferry was just for pedestrians and bicyclists. While we knew the Netherlands were extremely bicycle friendly, it had seemed almost like a myth and just too good to be true. So far, Holland has exceeded our expectations.

Next, our route brought us on top of the dike. The biking was great because there were few cars and we were able to enjoy the view. However, the view was short lived as large rain clouds rolled in. Soon it was pouring and windy. So windy and rainy in fact that both of us were blown off the road at one point and I had to stop because I could no longer see clearly. When I was finally able to catch up to Chandler again, we got off the dike at the next possible exit. That helped with the wind, but not the rain.

We were both completely soaked, even with our rain jackets and garbage bag skirts. Chandler and I both wear wool clothing while biking, so we plenty warm. Despite everything, we were having a great time. The biking in Holland was so stress-free, flat and interesting. There were animals everywhere and we had our first sighting of a windmill. 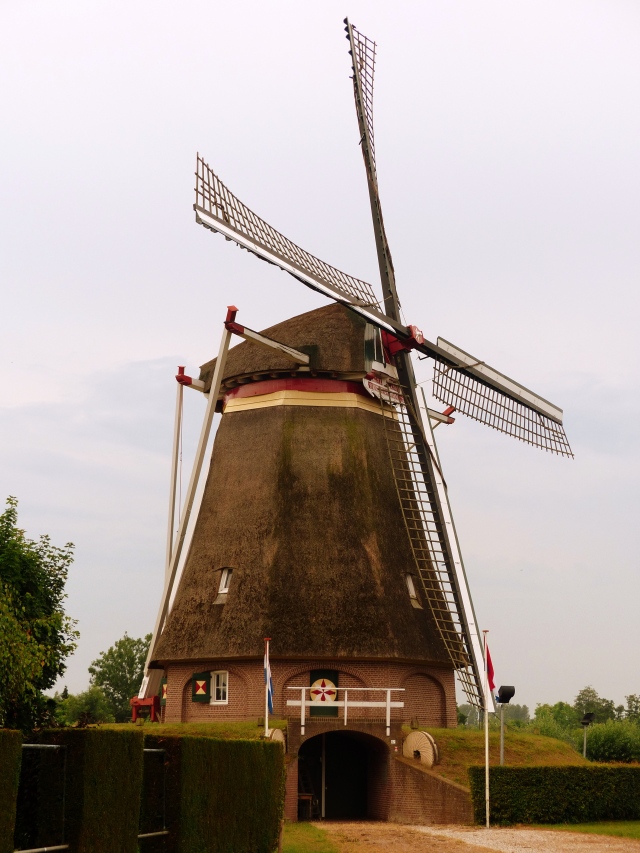 Eventually, the sun came out and we were able to dry out. We were feeling really strong and were hoping to reach Amsterdam the next day, so we put our heads down and rode hard. It felt good to put in a long day. We found a reasonably priced campground and set up camp in time for dinner. We ended having the best neighbors. The moment we got off the bikes, the couple camped next to us offered us some extra  chairs and another couple had an extra table we could use. We were hoping for another walk, but it began raining again and forced into the tent for an early night.