The last couple of days have been family and friends. We had a great time with everyone. For brevity we’ll only share the highlights. Here is a irrelevant milestone: We hit 66,666 miles on the odometer in the truck. The number below is the total miles driven at that point, 6,967.6!

Halloween night was spent with my brother Jon and his wife Katrina. We had dinner and a few drinks and told stories. The next day, Jon had a test, so we took him to school and hung out with Katrina until he was done and then explored Austin together for a bit. They were kind enough to give us some new podcasts as we had run out of “This American Life”. We are now listening to “Hardcore History” which are really good and informative.

We then headed up to Temple, TX to meet my friend and her family at a Mexican restaurant. This was cheap and incredibly tasty with enormous quantities of food.

We all tried cactus for the first time and I highly recommend it. We spent the night at their house and were able to check up more than at the restaurant.

The next morning we boogied on up to Weatherford, TX to visit with Chandler’s Aunt Rosemary and her partner, Kent. Kent’s brother Mark and his wife Sum Se were also visiting. We spent two nights with them and had a lot of fun playing all sorts of games from the Wii to washers, similar to horseshoes. Sum Se is from Thailand so we got lots of good tips for our upcoming bike trip which begins in Bangkok. Sum Se also called Lucy by a new nickname which has stuck, BarBaQ! 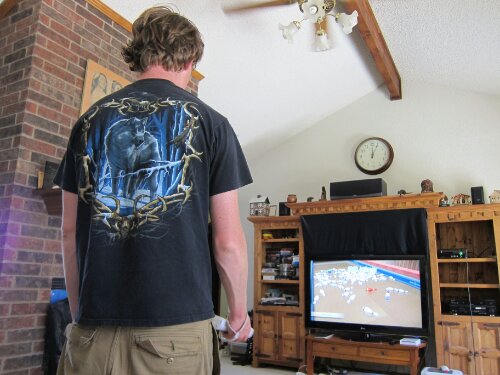 It was nice to take a few days off and not do any driving. Thanks to Jon, Katrina, Shana, Phil, Rosemary and Kent for some great Texas hospitality. Next stop Louisiana!