First thing in the morning we went over our potential plans and Chandler said one option was that we could just go home. I understood how he felt, but neither of us really wanted to go home, we were just not having a great time dealing with traffic and being in the middle of a very popular vacation spot. We talked things over and felt that the best thing to do was to get off the island and then make a plan. So, we headed off for the town of Cres to find a boat.

The riding started out poorly and further confirmed our dislike of the island. The road ran through the middle of the island, so there was no beautiful view to admire while dealing with the awful traffic. Things got much worse right before town. We were funneled completely onto the road by concrete barricades running along the sides of the road. We had to hope traffic behind us was paying attention because there was not enough room for two cars to pass with us in the road and we had no exit from the road if we heard someone barreling down behind us. I wish we had taken a picture of what we dubbed “the chute of death”, but we just tried to get through it as fast as possible. Right at the end, a concrete truck blasted past Chandler and the turbulence knocked the right side of his handlebars into the barriers which steered him more into the barrier where I found him leaning and swearing profusely. We decided it was the most dangerous section of road we had cycled on thus far.

Things improved once the concrete barriers disappeared. We descended into town and the traffic lighten up. Once in town, we immediately got something to make us feel better: ice cream. We also learned that we would not be able to take a ferry from Cres. All the ferries were of the catamaran variety and bikes are not allowed. Discouraged and facing a big hill, we set off again for there end of the island. 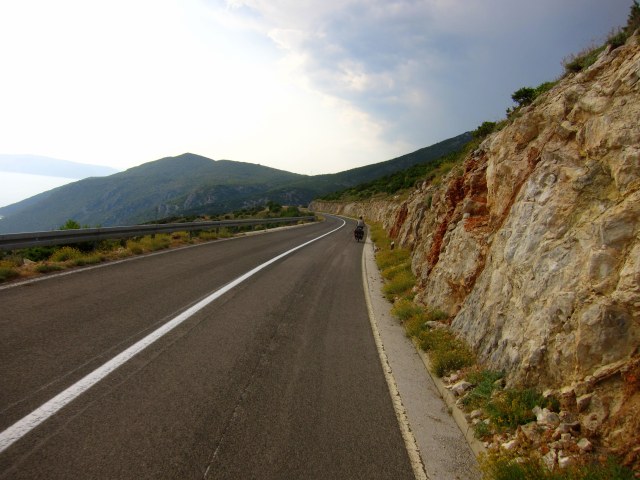 Maybe it will storm

Back on the bikes, something changed and we began to enjoy ourselves, for the first time of the day. The traffic only came in waves, which we figured was timed with the arrivals of the ferry we were headed towards. We had some awesome views of the ocean and interesting rock formations. The highlight though was crossing the 45° parallel! 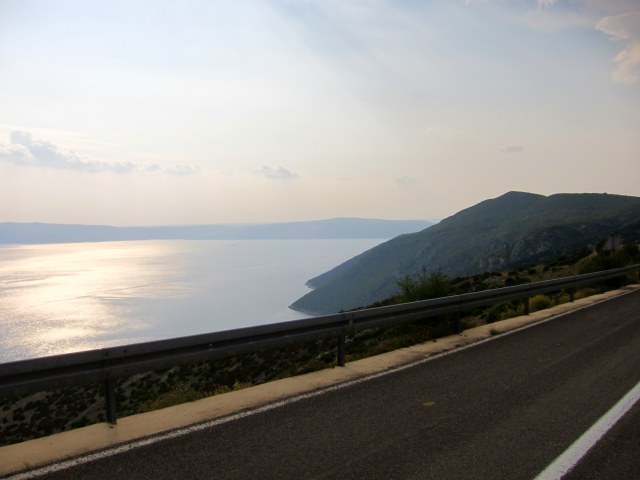 The rock is melting 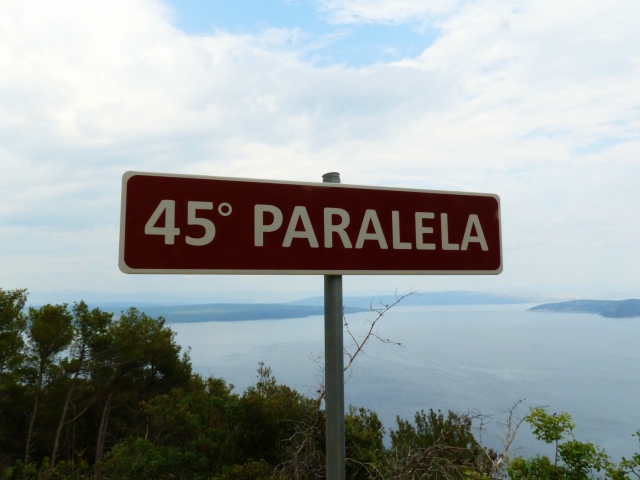 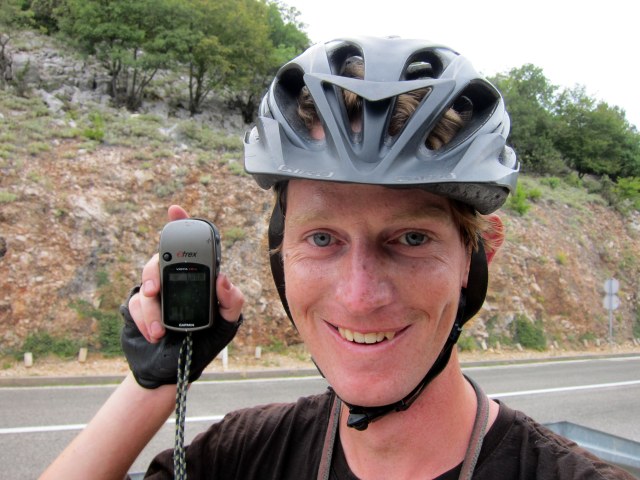 Chandler proves it on the GPS!

When we finally got to the ferry we were especially pleased to pass all the drivers who had blasted past us. We recognized a few tourists who had honked at us to get out of the way in their rush to catch the ferry (that ran every half hour anyway) and relished their sour faces. Boy, what a great attitude to have while on vacation! Bikes and motorcycles have first priority, see yah!

Drink a for the road? Soda or beer?

The ferry ride lasted about 30 minutes and then we were deposited on the main land. We had a steep hill to battle and then it was time to find water and a place to sleep. We stopped at a rooms for rent sign, but found out it costs 40€ and had to pass, but the lady kindly filled up a water bottle for us.

Still a little desperate for water, we kept going. Not five minutes later, we came to a town with a grocery store still open. Chandler went inside to get us some food and I went to a nearby bar to get our water bottles filled for free.

Now we were ready to camp. Again, we found a perfect spot not five minutes later. We had to push our bikes through some trees to reach a secluded little meadow, but it was peaceful and quiet.

Tomorrow we’d ride along the coast towards Rijeka, and depending on how things looked, swing north towards Slovenia. Ultimately, island hopping in Croatia on a bike sounds a lot better than in was, at least for us. Granted we were here at the worst possible time, near peak tourist season, but the roads are not really built for stress-free cycling, truck drivers seem to hate cyclists, ferry options are limited for those with bikes, camping prices ranged from expensive to ludicrous, and honestly the section we rode through had some highlights, but there were long sections of very boring riding.