The alarm went off bright and early at 6am. We wanted to give ourselves plenty of time to get breakfast and find the ferry terminal. Luckily, everything went really well. There was an open bakery just down the street from the campground with cheese pies. We had time to stop at an open grocery store and pick up a few snacks for the ferry also.

Finding the ferry turned out to be just as easy. We pulled in and were allowed on early to get the bikes situated. Things could not have gone better. We even managed to find a table next to a power source so we could charge up our pile of dead rechargeable AA batteries.

The ferry ride lasted six hours. During that time we drank coffee, ate snacks, read, played cards, wrote a few blog posts and I watched a movie. It was relaxing and productive.

We got off the ferry in Mali Losinj and it was hot! We found the Lidl and stocked up on groceries. There wasn’t much going on and there wasn’t any traffic so things started out well.

We were pretty tired even though we hadn’t cycled much, so we headed to the closest campground. It turned out to be some sort of deluxe resort campground. With a straight face they said the price was 35€ a night and we could have the pleasure of setting up our tent on rocks behind the maintenance shed. We decided it would be better to go elsewhere.

After a few miles past the campground it was clear that the island was not what we expected. For some reason, we envisioned quiet and relaxing. Instead, we encountered expensive and lots of traffic. We weren’t really inspired by our surroundings and not having the best time. We stopped at a number of locations to check out possible campsites, and there were a few places that would have worked, but none great. There were huge spiders everywhere and drinking water nowhere.

Eventually, we made it to another campground and found it to be quite reasonably priced and not looking much different than the last one. We also managed to find a spot that wasn’t crowded. Apparently, nobody wants to sleep next to the church and graveyard. 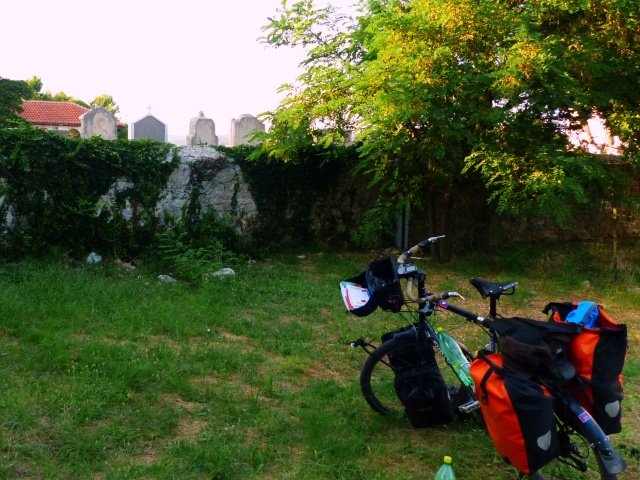 We spent the remainder of the evening working on our new travel plan and updating the blog.