We were happy to wake up and see that the river was back to its normal, ankle deep level. It took a few trips back and forth to get everything across and we had numb feet by the end. The morning riding was uneventful, until we approached a large lake we needed to go around. 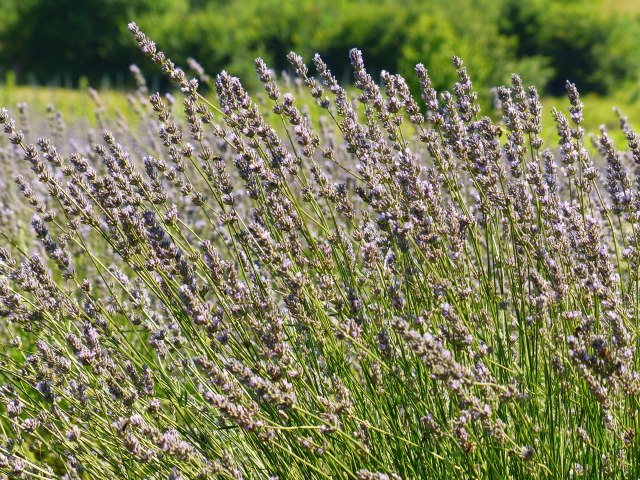 There was a highway we could have taken to the west, but there were lots of large trucks driving like crazy so we followed some new looking bicycle route signs which indicated we should make a turn to the east and go around the back of the lake. The riding was great and quiet for a while. Then we got to some abandoned looking buildings and a fork in the road with a gravel road leading one way and a decent paved road leading the other. We chose the paved road which led into a village that looked abandoned with buildings missing walls and collapsed roofs. 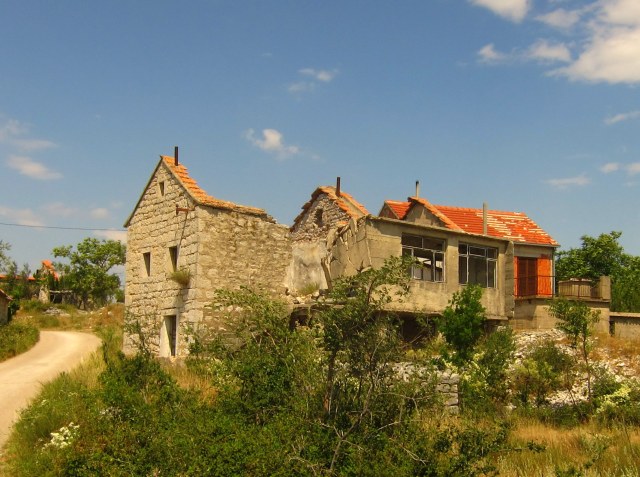 In the middle of the ghost town, we saw a person, which was startling, making repairs to a brick wall. As we continued, it became more obvious that we were in a bombed out town that was slowly coming back to life. Eventually, we reached a dead end and a little boy came out of a house. He explained that we had come to the end of town and that the dirt road was actually the correct way go north. So, we turned around.

The dirt road started out by going around a beautiful blue lake with some cows grazing around the perimeter before going up hill. At that point, dirt turned to loose gravel pushed into windrows by automobiles so our wheels no longer got traction easily and we had to push a lot. The sun was blazing and there was absolutely no shade to the road, but there were plenty of trees in the field near us. It would not have been a problem to duck into the field and get out of the sun, except we saw signs indicating that there were landmines around. We passed a concrete bunker and we realized we were probably right in the middle of a heavily fortified part of the front line of the war. We were too scared to move off the road at all, so I ended up peeing in the middle of the road to be safe. We had 7.5 more kilometers of gravel road and landmines. We were so tired and fed up with the situation, that when we finally saw pavement and Chandler got stung by a bee, I was not surprised by the hail of curse words coming out of his mouth.

It started out nice

The road goes on forever

Back on smooth road, our moods turned around. The next few miles were over flat terrain and we were able to move quickly while feeling that we were recovering a bit. Soon our tranquil, empty road became busier and we were excited to reach the upcoming town for a little ice cream snack.

The road ended up dumping us on the highway at the far edge of town in the middle of a big hill and we didn’t have the energy to go a few miles out of our way just for an ice cream break. Instead, we started to climb and were immediately on a crowded road with lots of big trucks again, our nemeses. Beyond frustrated, we began fighting, which meant it was time for a snack.

Back on the road, we opted to take another dirt road. We were a little hesitant after our last excursion into the post-war zone road from hell, but were happy to see on the map that it was all downhill and there was no loose gravel, at least at the top of the hill… The road ended up taking us along a river with beautiful scenery including a few abandoned stone mills which sometimes sat right in the middle of the river. Nobody was around, so it was the perfect spot to start looking for a camping spot. Chandler spotted one pretty quickly just off the road down a super steep embankment.

It was right next to the river, but with enough trees along the road to hide us from any potential traffic. We hauled the bikes off the road and set up the tent. We considered jumping in the creek for some refreshment, but the water was ice cold and we turned around shin-deep. We had a nice time relaxing after a tough ride, glad to have found such a spectacular spot to spend the night.