With such a lovely campsite and enough food to last us the day, we decided to stick around. We started out the morning with an extremely chilly dip in the river to wash up, breakfast and some laundry. With no electricity to power the laptop, we relaxed and read. A little after lunch, a large storm came down and raged around us for a few hours.

We took our time getting ready to leave camp the next day. We had a number of things that needed to dry before being packed away. We were happy to see that the dirt road did not turn into mud and we were able to ride along quickly. We were surprised to find a beautiful waterfall when we finally reached pavement again. 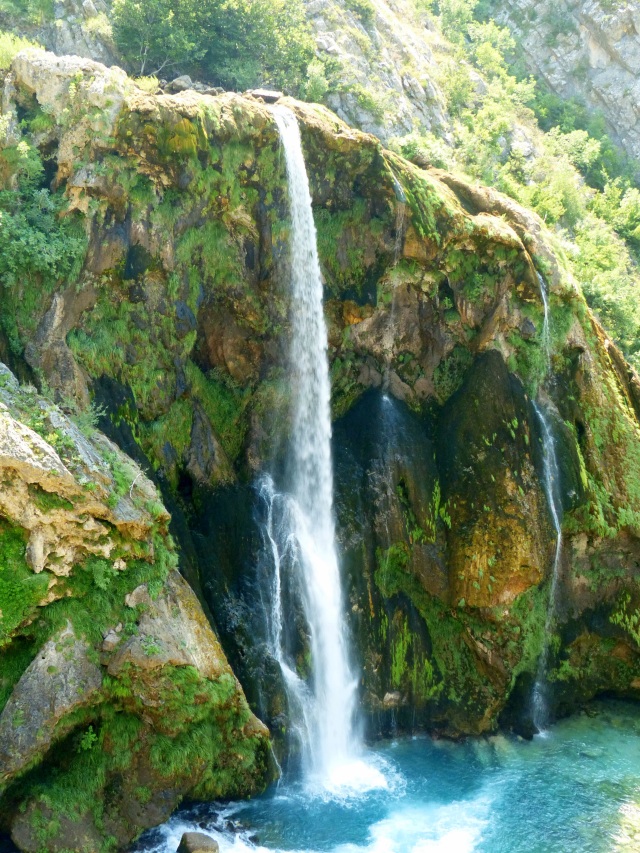 When we rolled into town, Chandler had the wonderful idea of getting some coffee and a big pizza for lunch. After not spending any money the day before, we could afford to splurge a little.

Our company during lunch

Not two minutes after leaving the restaurant it began to rain. First, just a little sprinkle, nothing that needed a raincoat. Soon, it really began to rain and we stopped to don protection. At the top of the hill leading us out of town, the lightening began. The storm moved really quickly and caught us off guard. The first lightening strike was a few miles away and within a few moments, the storm was directly overhead. No pause between lightening strike and thunder boom. That was when we both got scared.

Chandler spotted a covered bus spot and we figured it would be better to wait out the storm than to be in the center. We pulled out the playing cards and played two rounds of gin rummy before the rain was coming in sideways and soaking us. At the same point, the lightening was striking all around us. There was a high-tension powerline a few hundred feet away which seemed like the most likely thing to get hit, so we felt a sliver of safety. Almost right away a huge bolt hit a power line tower about 500 feet from us and the large ceramic insulator exploded in a blinding flash of light. This is when we took a closer look at our “shelter” which was constructed with a metal frame paneled with plate-glass… maybe not such a great spot, but we had no other option but to ride in the downpour. So we waited it out nervously. 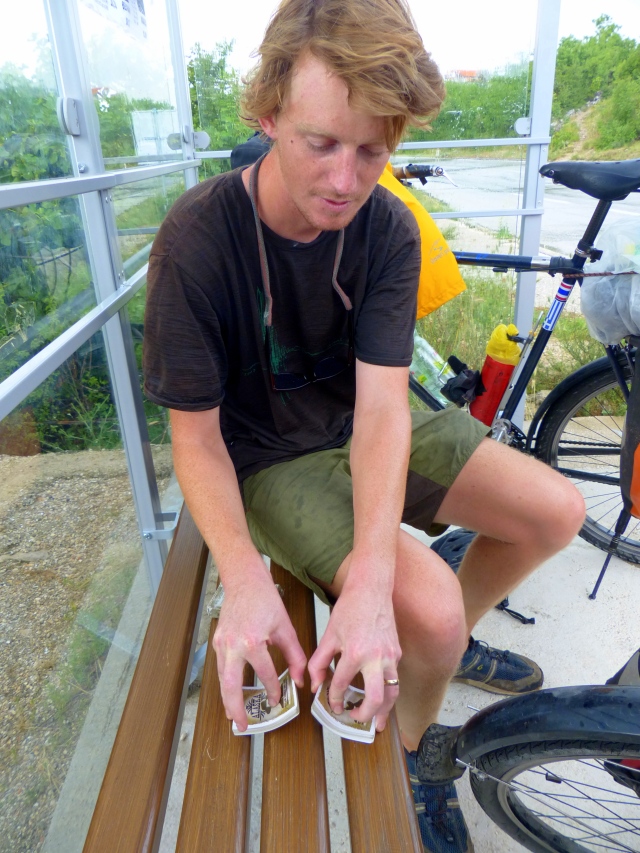 Eventually the lightening moved a little further away and the rain let up. We seized the chance to escape and continue along our way. We could still see the storm in the distance and realized that the road was heading in the direction of the storm that just passed us and another wave was approaching from behind us. Sooner or later, we would collide again. Luckily, when the rain and lightening started up again, we found a more solid roof to put over our head.

Trying to avoid the storm

We pulled our bikes and ourselves into a tiny little chapel. It was made of stone, so felt more secure than our glass and metal bus stop. When we began discussing options for possible sleeping arrangements, the storm made a turn and the rain let up. That was a good things too, there wasn’t enough room for us to lay down with the bikes inside.

Harbor in the storm: a self portrait

Back on the road again, we opted to take another Chandler “adventure route” to avoid the main highway. The traffic wasn’t bad on the highway, but with so much water spraying everywhere, we were worried drivers wouldn’t see us. The shortcut turned out to be a hard packed dirt road with lovely views of the valley below. 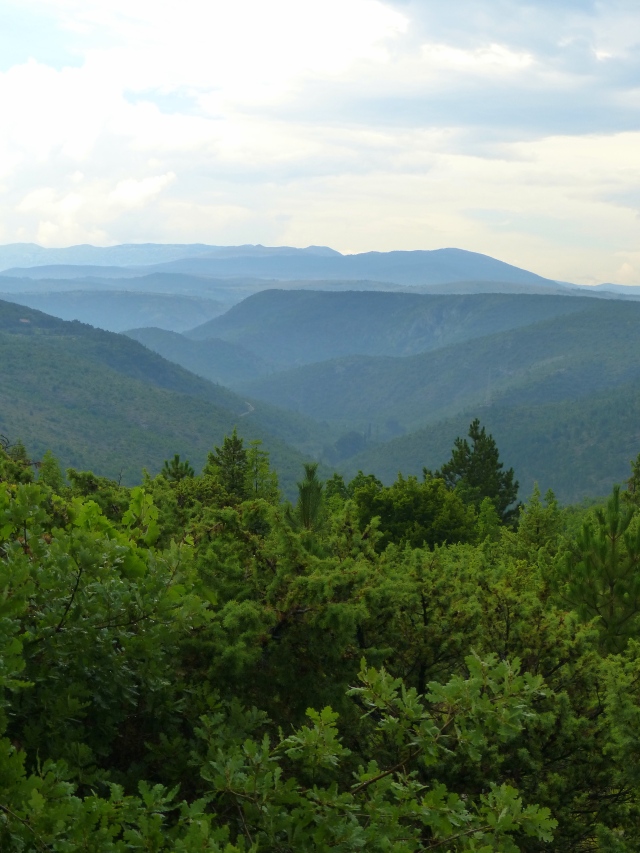 We were still being followed by rain clouds, but only getting a light drizzle. After passing through what we thought was an abandoned town, but with a thriving restaurant , we decided it was time to find a place to sleep. Miles away from a town with a hotel, camping was our only option. With the constant worry of landmines weighing on our mind, we looked for a pasture that animals had clearly grazed in. We preferred to sleep in poo than be blown up. 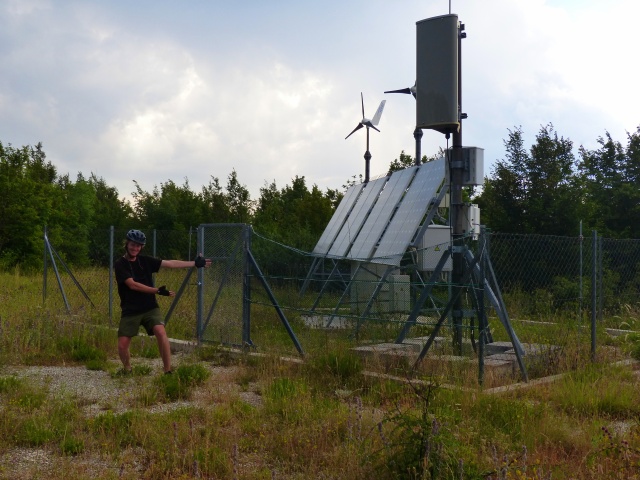 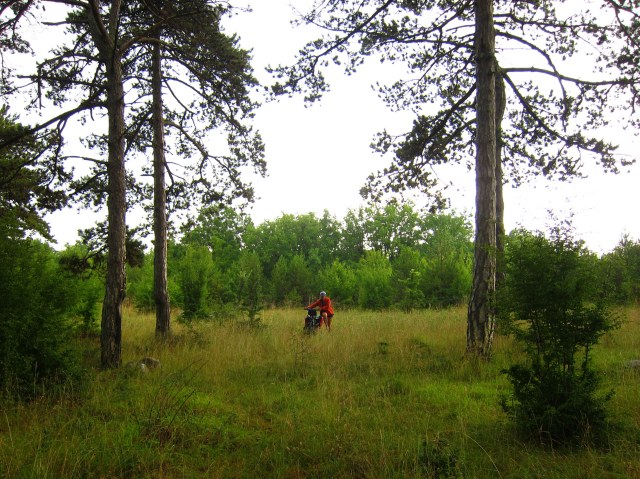 Right outside of town, I notice the perfect place. A pasture surrounded by trees. This would give us protection from the rain and lightening and hide us from any people passing by. We managed to find an area without animal poo or plants with sharp thorns. Right as we began to set up the tent, it began to rain. We quickly finished the job and covered anything that couldn’t get wet and decided to have bread and cheese for dinner in the tent.

2 comments on “Riders on the storm”