The morning came too early with a knock on our door at 6am. The family wanted to go to their beach apartment in Croatia and we had already agreed on an early wake up. We had coffee and cake with Ivan, his parents and grandfather before it was time to hit the road. We took a few pictures, then hopped on the bike feeling inspired. We talked about the generosity of the family and hopefully extending that same generosity to others in the future. 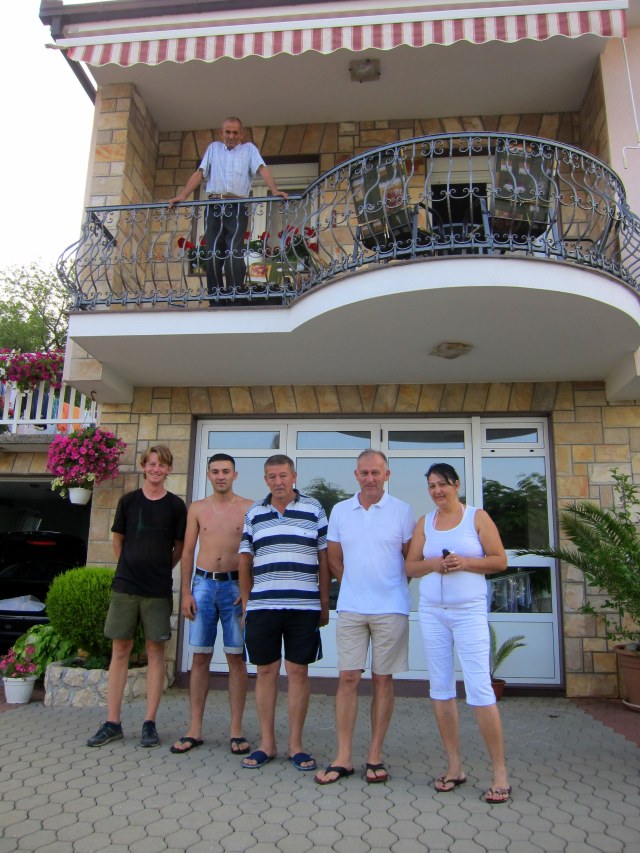 We reached the border crossing after a few miles and were sad to be leaving Bosnia and Herzegovina after only a few days. However, not wanting to turn around, we continued on into Croatia. We didn’t notice much of a change in the first 20 miles because everything was written in the same language and had the same general feeling.  Right before the town of Imotski, a car started honking at us, which we thought was just an aggressive Croatian driver giving us a “welcome”. However, it was just Ivan and his parents honking and waving, with the windows rolled down, taking pictures of us riding. It was great to see them one more time before turning into town.

It was also a perfect time for a break. Having only eaten cake with our coffee, we were both feeling crashed after so much sugar and caffeine. It was time for a proper snack and some bike maintenance. My front wheel was clicking so loudly that Chandler could even hear it, several feet away from me. While I made us sandwiches, he quickly changed the bearings of my front wheel, same process he had done to his front wheel in China, and again in Istanbul. We haven’t really ridden much in mud or dust or immersed the bearings, so it just seems that their seals are not that great.

Back on the bikes, we cycled into Imotski, Croatia and headed straight to the Blue Lake. This lake is one of two famous sinkhole lakes in the area and this one was obviously a beautiful color blue. The lakes are really deep and connected to an unexplored subaqueous cave system, which is kind of spooky. We enjoyed some free internet at a nearby café before venturing down to the water.

While I did go into the water, I did not stay in long enough for Chandler to take my picture. I grew up swimming in the safety of swimming pools, while Chandler spent more time in lakes, rivers and the ocean. I tend to not stay long in places I find creepy, dark, dirty, murky or have any number of other “conditions”. Chandler only swam for a few minutes before it was too cold and came out to start the climb back to the bikes. 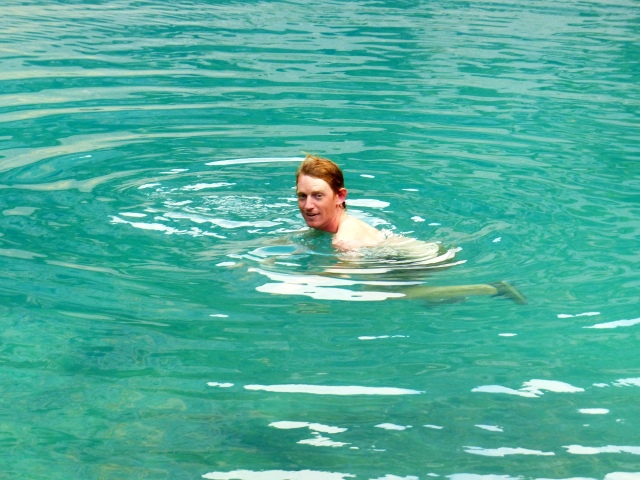 At this point, the clouds had come out and it was starting to sprinkle. Chandler agreed that we could stay in town if we found a place for 20€ or less, but there were very few options. We stopped at a bakery for our favorite cheese pies and asked about rooms for rent, but the baker knew of none. After a few inquires at hotels, the cheapest rate was around 60€. It was obvious we were now in expensive Europe and we’d be putting in more miles today.

Back on the road, we headed out of town. The map on the GPS was not of the best quality, so we stopped at a mega mall to look for a map. I waited outside with the bikes while Chandler went shopping. Coming back empty handed, we had no option but to continue in the basic cardinal direction we knew we needed to go.

Outside of town, we were immediately in the countryside. We skirted along a mountain ridge, we knew we would eventually have to go over, but we were avoiding as long as possible. We passed through a number of vineyards, where I was disappointed to not see anyone selling their products.

Eventually we found ourselves sitting on the road, trying to figure out what to do. I wanted to camp in the nearby pasture, but Chandler was not convinced that was the safest place. I walked up the road and found room leading behind an abandoned stone hut. Chandler thought it was a better place, I thought it was creepy and might be haunted, but agreed to camp there. We promptly set up camp outside the hut and proceeded to relax, Chandler took a nap and I read my Kindle. We could see across the valley from our vantage point and noticed a number of other stone huts scattered around the hillsides. We figured they probably belonged to old sheep or goat herders who either moved into the towns or died off. 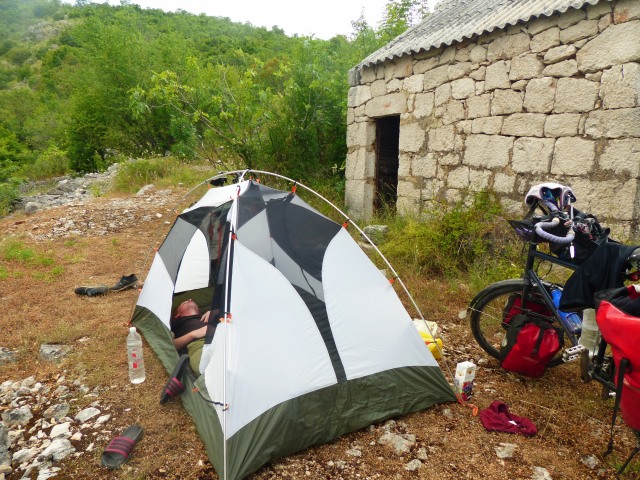 We had a moment of concern after dark when a car stopped on the road above our spot, not 50 feet away, and I was sure we were going to be harassed. Luckily, after a few minutes idling, the person moved on and the worse we had to deal with was a short burst of rain.