The weather cooperated all day. Our morning started with a climb up along a ridge in cloudy skies. We were rewarded with a view of the lake and several donkeys. 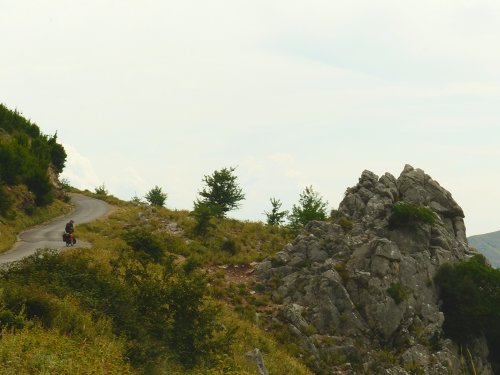 The view from the top

Jenny and a jenny

We had a nice long descent which brought us to a little town with a cafe. Naturally, we had to stop for a drink. The coffees were a little more expensive at 1€ each, but still so cheap.

After the break, we got back on the bikes and headed back into the hills. We rolled along up and down, never gaining anything. We passed through a densely shaded area and realized we were in a chestnut forest that we heard about from other cycle tourists. It was way too early in the day to stop, so we just took a break and had a snack.

As we passed through a small village, we spotted another cycle tourist and decided to stop for a little chat. He was from England headed to Macedonia where he had a flight to catch back home. We discussed routes and free campsites. When talk turned to food, an older woman came up to us and motioned to a table with bottles of oil and wine. I jumped at the opportunity to enjoy some homemade red wine. She gave us a sample and we bought a liter. The wine tastes nice but presentation was lacking as the wine was sold in a recycled water bottle. 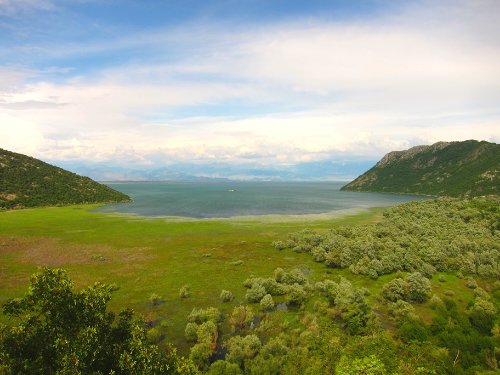 We coasted down into a valley and were able to take in some great views of the west side of Lake Shkoder.  At the bottom of the valley was a small town with a nice park and lots of tourists milling around. We saw a gelato stand and a fountain and immediately put on the brakes. After scoops of chocolate, we did some much needed grocery shopping. As usual, I waited outside with the bikes as Chan got our dinner.

Outside of town, we encountered a series of switchbacks leading straight up the side of a steep hill. Knowing it was the last climb of the day made it easier to handle. There was a lookout point at the top of the hill with a number of tourists appreciating the view. Not knowing how much further we would have to before finding a campsite, we opted to keep biking. 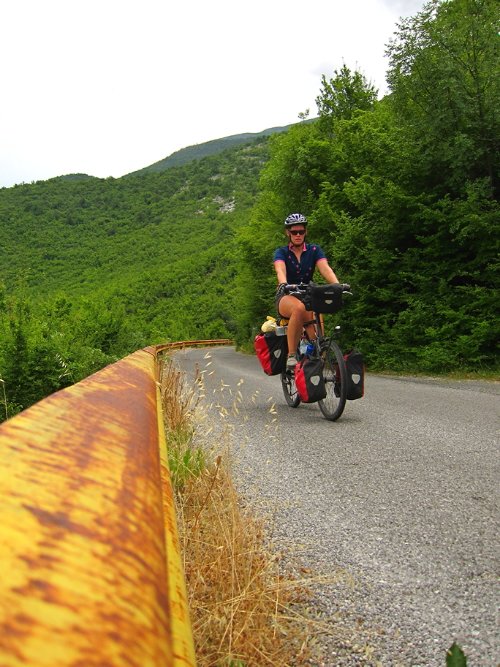 We couldn’t have gone more than 100 meters before we spotted an overgrown road leading underneath the lookout area. Chandler scoped it out before we dashed down the road hoping cars hasn’t seen us.

The spot was only visible from the road from high up on the hill, so we weren’t concerned about curious visitors. What I weas more worried about were the spiders. There were huge webs strewn between trees with giant spiders waiting in the center of the web. It made trips to the bathroom in the woods a bit more scary.

We had a nice night despite the spiders. Chandler enjoyed a 2 liter bottle of cheap, low alcohol beer with our usual dinner of pasta.