We woke up to a beautiful morning and were very excited knowing that we would not have to go far to find coffee. The cafe owner was playing with her grandchild when we got up to the restaurant and her daughter brought us delicious espressos immediately. We lingered over our cups while watching the sun rise and trying to coax Bianca, the granddaughter, to smile at us. Soon, it was time to say goodbye and the owner refused our money, just wishing us well and making sure our water bottles were full. We are continually surprised at the generosity of strangers. 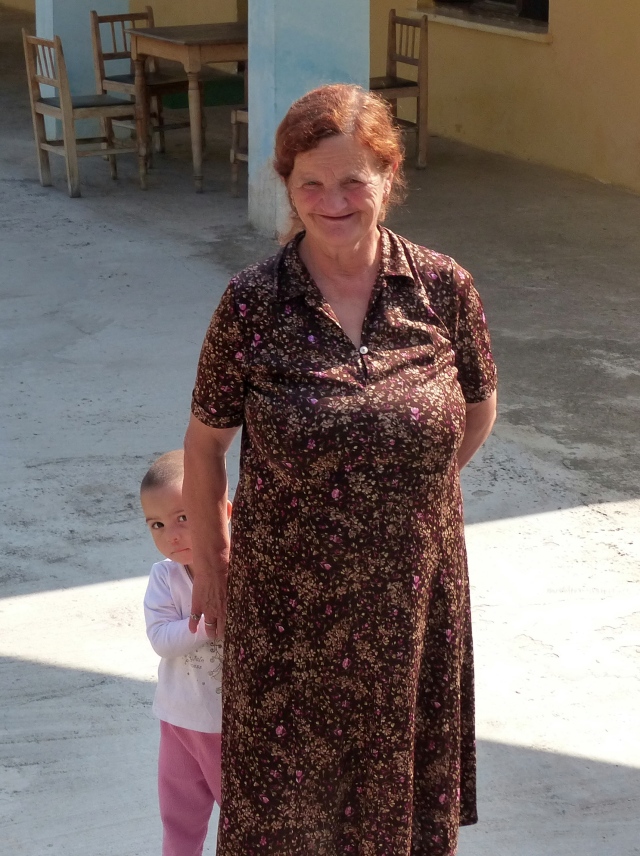 Too shy to say goodbye

The riding started out with gradual hill climbing as we followed the road along the river gorge. We were treated to really stunning views of the river, small farmhouses and vineyards way down below on the shore. We marveled at how lucky we felt to be in such a wonderful place. After a little while we came to a bottleneck in the gorge. Chandler was happy to find out we had been riding along a reservoir, which led to a dam. Next to the dam was a tunnel through the mountain. We don’t like tunnels, and this one wasn’t lit as usual. 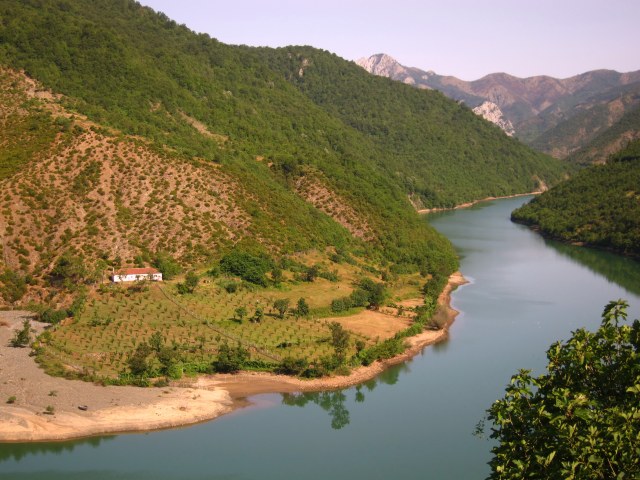 View from the climb

After the excitement of what turned out to be a short tunnel, we were funneled onto a major highway. We attempted to stay on the old road, but it promptly led us to someone’s house before ending at a cliff over the new road. We looked at the map and realized we would only have to be on the highway for a short while, so we turned around. We were actually very pleasantly surprised to find the new highway had a huge 5 foot shoulder on our side (curiously no shoulder on the other side, so we got lucky) and very little traffic. We made really good time with a tailwind, flying along the pavement before having to exit at the town of Milot. The road condition deteriorated but we didn’t notice too much because we ran into some other cycle tourists. They were two boys from Denmark cycling to Macedonia during their break from University. We talked routes and exchanged amusing antidotes from the road. The boys also suggested a slow food restaurant in the town of Fishta.

The rest of ride was along rolling hills weaving through small villages, which we didn’t pay much attention to because we stent the whole time keeping an eye open for the restaurant. When we reached Fishta, the restaurant was obvious because it was nice. A lot nicer than what we were dressed for in our sweaty bike attire. The owner immediately offered us seats outside and explained the system. The menu was in Albanian, which we don’t speak, so he asked how much we want to spend, per person, and he would arrange something nice. We decided on 10 Euros each and explained I am a vegetarian. We were then presented with the most incredibly, amazingly delicious feast!

Chandler is ready to eat

Our meal included wine and beer and an assortment of cheeses, olives and breads as an appetizer. We were then given various steamed or breaded vegetables with more cheeses and homemade sugar syrup made from pine cones packed with sugar in jars left in the sun. Next came the main course of pasta with a mushroom sauce for me and leg of baby goat for Chandler, with a side of roasted potatoes to share. Dessert was fresh fruit and coffee. We spent about three hours enjoying the food and were contemplating camping on the lawn so we could do it again the next day.

A little something to get us started

Feeling extremely full and happy, we waddled back onto the bike in search of a hotel. As luck would have it, we encountered a fierce headwind, which cut our speed down by half. Normally, I would be cursing the wind, but I actually appreciated the extra effort to help work off the meal. When we reached the town of Mjede, we decided to call it a night instead of continuing to struggle another 10 miles. The hotel had reliable wifi, so a rest day was in order for the next day. Plus, we were avoiding leaving Albania and wanted to stick around one more night!