Due to some confusion the day before, we missed out on the brewery tour, but were told to come back in the morning. We had a quick breakfast and showed up when the brewery opened ready for the tour. We spent about half an hour engaged in confusing dialog with the lackadaisical security guard before a woman who worked in the office came by and found someone to give us the tour. Our guide turned out to be production manager for the whole brewery. He ended up being really cool and opened up a lot once he realized Chandler and I knew a lot about brewing. His whole brewery is controlled with a SCADA system which means he can manipulate the most minute details of the brewing process from any computer equipped with the proper software. He knew a ton about lagers and the beer he brewed, but when we were comparing malt to water ratios for our American style India Pale Ales, he kept saying “Impossible!” He had been on a tour of a Budweiser brewery in Florida and assumed that was how all beer in America was created. We tried to explain craft brewing and “100% malt” but it didn’t seem to translate. For as saturated as the micro-brewing culture is within the US, it doesn’t seem to have penetrated to the Balkans!! 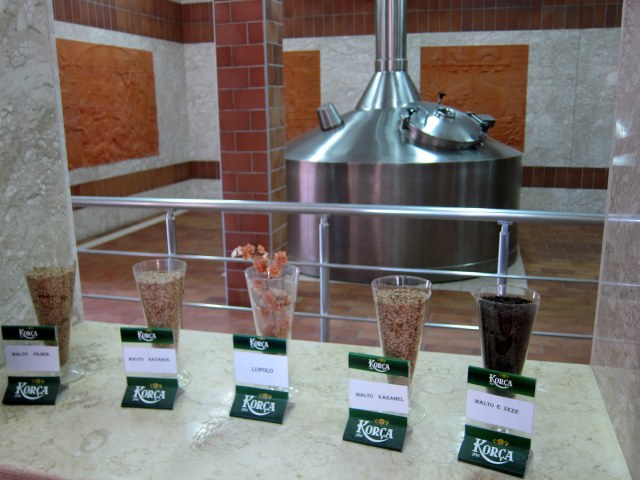 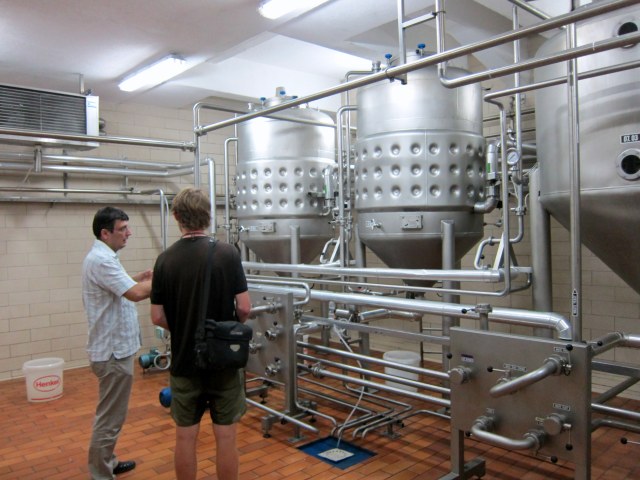 While chatting and looking at the computer system we sipped some of their black beer which was just a lager with some black patent malt to color it. The last part of the tour was through the bottling and kegging station, and then we hit the road before 10am. Being so close to Macedonia, we decided to take a swing through for a few days before passing back through northern Albania. The ride to the border was mostly flat with a few hills that made for easy riding. Crossing from Albania to Macedonia was as straight forward. 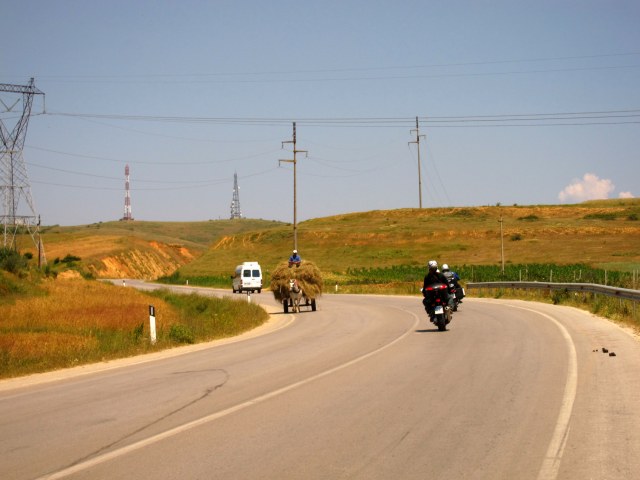 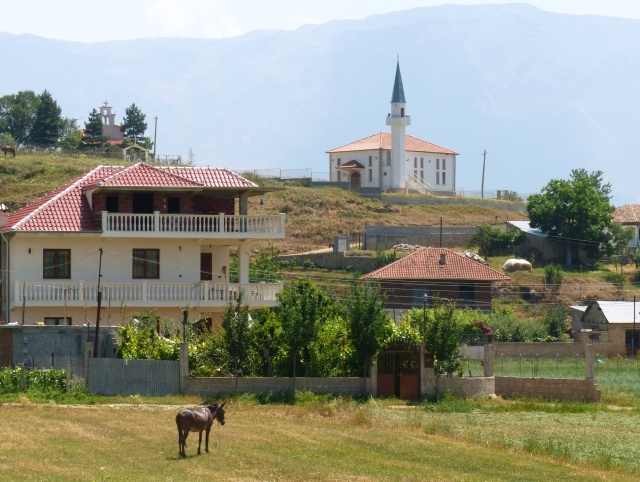 We planned to make a circuit around Ohrid Lake which saddled the border, through the town of Ohrid and then back up a river gorge into Albania. Since on the map the road appeared to follow the lakeshore, we assumed it would be flat and mellow so we could make good time. The road was actually shoulderless and narrow, winding up one steep hill after another, leaving us sweating buckets. There were tons of tourists in sporty rental cars out for a drive passing way to close and too fast for the quality of the road.

We were planning on camping outside of Ohrid, but it quickly became obvious that was not going to be an option. The closer we got to the town of Ohrid, the more developed the land around the lake became. When we reached a small town offering apartment rooms for rent, Chandler suggested we stop. We ended up finding a great room which included internet and a balcony overlooking the lake for 20€. We parked our bikes around the back on the building, carried our panniers to our room and then had a swim in the lake.

The water was the perfect temperature after a hot, sweaty ride. We swam around for an hour to cool off. There were a lot of little fish that would come and nibble our legs if we held very still. The sensation reminded me of the fish pedicure I had in Siem Reap, Cambodia. We had fun seeing who would attract the most fish.

Swimming in the lake

Feeling much more relaxed, we headed back to our room to shower, do laundry and use the internet. Once chores were out of the way, we headed to a restaurant for pizza. We had access to a kitchen at the apartment, but with prices so low, we had to take advantage of not cooking or cleaning.