We lingered the next morning as long as possible over second cups of espresso before forcing ourselves to get on the road. It was a short ride to Korçe from Erseke, up and down hills and past meadows filled with flowers. We had one big pass to climb, but again the traffic was almost nonexistent and the grade was mellow. The cars that did pass us were courteous and friendly. With both of us feeling so strong, it was almost a shame we had such a short day.

Chandler and his “bar of justice” 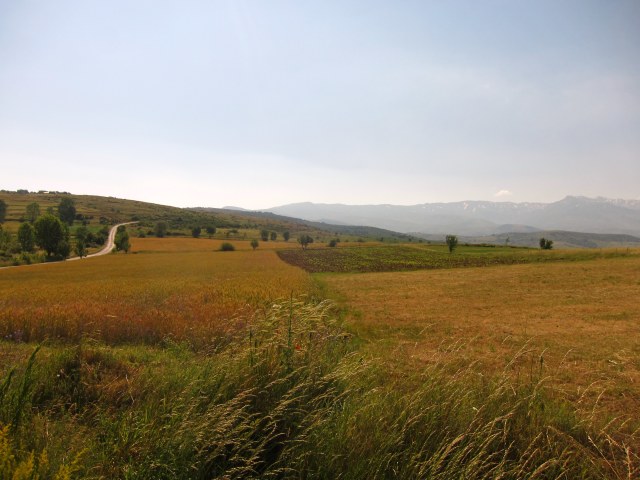 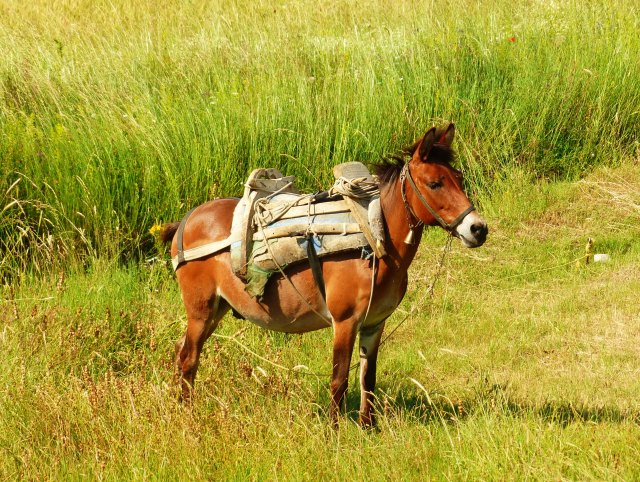 Maybe I will switch from a bike to a horse? 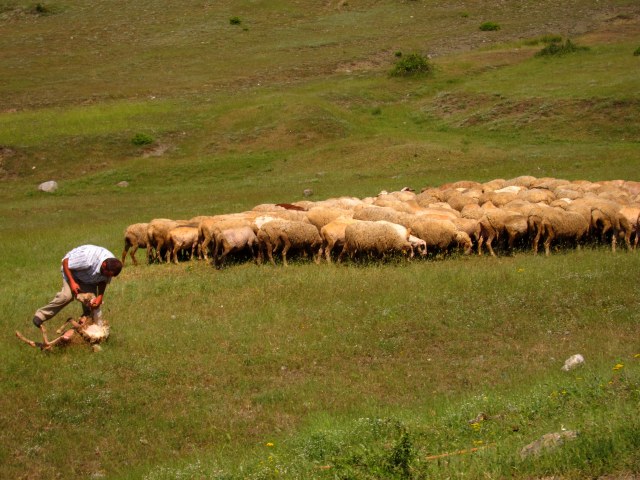 Who’s next for a haircut?

Normally, when we hit large cities, people ignore us and treat us like any other tourist. Korçe was completely different. Old men were leaning out windows to wave and young men were banging on bar windows to get our attention. I felt like a celebrity as we traveled through town. We biked around and after some meandering, we found the small local “Hotel Vienna” which rented huge rooms at 20 Euros a day. Unfortunately, the rooms were on the third floor and there was no air-con. We rearranged the room so we could open the windows behind the beds, which let in a little breeze. We spent the rest of time exploring town.

There was a pretty extensive market at the center of things, rivaling anything we had seen in Asia. Pretty much any item of construction material or hardware was on sale at cheap prices. There was also a central nucleus of food sales where women sold cherries, olives, peaches, tomatoes and all sorts of other produce at rock bottom prices. Chandler got caught in a bidding war between two olive sellers and ended up buying a half kilogram from each at a total cost of less than $3. There was a lot of cheese and butter on sale also which we didn’t buy since we don’t have a great system for long term storage.

We took a rest day in town and gorged ourselves on cheap pizza and lamb and chicken gyro’s for Chandler. We discovered the Korça Brewery which was a major highlight. There was a lovely shaded beer garden serving food outside where we spent several hours relaxing. The atmosphere was great and the prices we unbelievable. We added up the price of every item on the menu and it worked out to less than $40. We ordered up a feast and stayed well within our budget.

Albania so far was a cycle tourist’s dream come true: friendly people, good traffic and roads, beautiful scenery and cheap food and accommodations. We were already making all kinds of fantasy plans about future vacations.