Now that April has arrived, we are starting to feel this portion of our trip coming to an end. Soon we will be boxing up the bicycles and boarding a plane for India. We are excited for the food, especially since the Chinese doesn’t understand the word vegetarian, and having new experiences. However, we don’t have much further to go before we reach Dali City and see no reason to rush. The heat is no longer a problem and our legs are pretty strong so once we get into a rhythm even big climbs are just a normal part of our day now.

We spent the first part of the day riding on the old highway on the other side of the river from the main highway. Eventually the two highways merged and we were forced to ride on the shoulder of the busy road, which is never much fun. After a while of grinding away, we noticed that a lot of the villages were way down below us in the valley and we could see the thread of the old highway connecting them. We took the first turn we could find and plunged down into the valley finding ourselves in a very dirty, but eerily quiet village. As we’ve seen quite a bit on the old highways, the roadhouses and truck stop guesthouses all lay abandoned, their usefulness gutted by the relocation of the highway. We hung a left in the center of town and headed back uphill on the old highway, which was still well paved, but littered with piles of bricks and logs that we had to meander through.

Things went fine for a few kilometers as we quickly regained our elevation quietly and without seeing another single vehicle. We kept getting closer and closer to the new road, and eventually construction debris from the highway project littered our road, nearly making it impossible to ride. We held out for a while, willing to trade less smooth tarmac for more peaceful riding, but eventually the fill from the new highway obliterated the old and we were forced back into traffic.

The geology in this region included lots of steep stone outcroppings, and we saw some really weird depressions that were planted with buckwheat and tea. Our guess was that they were old sinkholes or entrances to karst formations in the limestone of the area.

There was lots more grinding away but eventually we crested the pass and saw a family out picking tea in their fields. Chan stopped and talked with them a little bit while they worked. They were quite amused that we took an interest in what they were doing, and that we wanted to take their picture. As we were getting back on our bikes to head down the pass, a teenage girl who was working in the field crossed the road and we noticed that she was wearing 4 inch high-heels. In China, heels are apparently appropriate for any occasion.

We buzzed down through the valley and saw tons of really stunning rice terraces, some vibrant green. The sun was at the perfect angle to be in your eyes but not be blazing hot. That’s when I saw it. The sign. Something in Chinese and 17km. I knew that this meant the hill we were about to climb would be 17 km of torture. We climbed about a kilometer before I caught up to Chandler’s bike, parked next to a bridge but he was nowhere in sight. A dirt road leading down a hill and presumably under the bridge veered off the road and I assumed this is where Chandler had disappeared to. 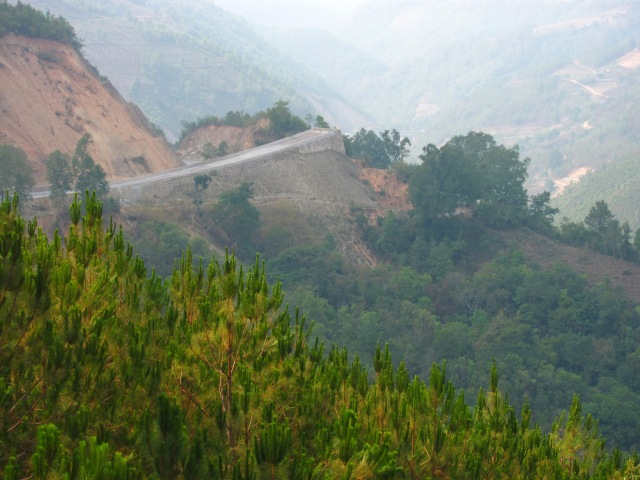 Lets hope they calculated that right…

A few minutes later, Chandler appeared at the bottom of the hill and I knew he had found us a campsite. We checked out the other side of the bridge to see if there was a better option, but we didn’t see any. When there was a break in traffic, we pushed our bikes down the path to a small clearing near a stream and some rice paddles. We reasoned that we were on a segment of the old highway where it switched back to cross the stream with a short span, but the bridge was gone and there were huge boulders blocking the road from cars and trucks. We picked out our campsite on the flattest area where we could only be seen from the midpoint of the span of the new bridge. 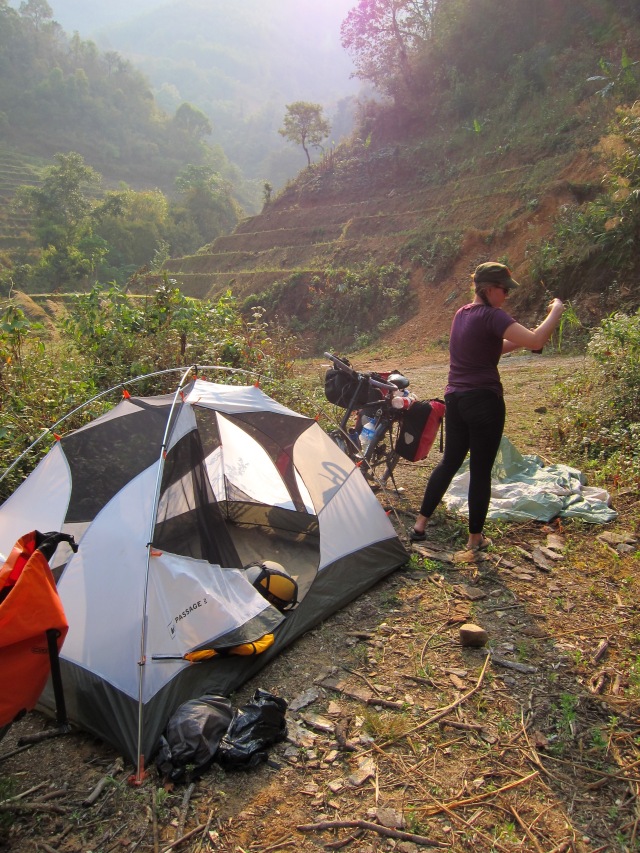 Our new stools made relaxing and cooking dinner much more comfortable. The sun was just starting to set and we were hearing fewer and fewer cars. We had a meal of ramen and mashed potatoes before setting up the tent, which we did last in case someone came by. We had no such problems and found ourselves snuggled in our sleeping bags and asleep before we knew it.