There is something so wonderful about waking up in our tent. Regardless of what happened the day before or what looms ahead of us, we wake up in great moods. We had a quick breakfast of oatmeal and coffee before breaking down camp. There was little traffic on the road this early, so we were eager to get started.

Getting into a groove was a little more difficult and at the same point, Chandler and I mentioned MP3 players. We rarely use music while biking, but something about a 17km hill made us need a little extra help. Chandler then decided to take to opportunity to transfer come podcasts from the laptop to his MP3, so out comes our new stools and we are officially taking a break right away. Good start to the morning. 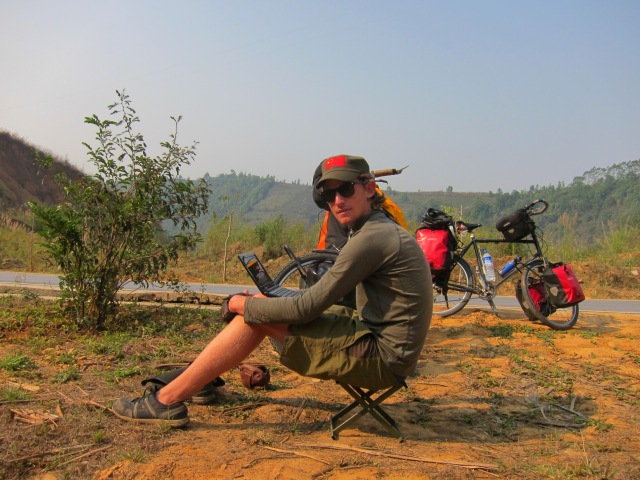 A little computer work on the side of the road

Eventually, we packed up everything again and remounted our bikes. Chan suggested that I lead and away we went. I must have had my Wheaties, because I was soon far ahead of Chandler. I stopped for a water break and actually had to wait for him to catch up to me. This NEVER happens. Naturally, I was ecstatic and jazzed which helped fuel me even more. I only gloated a tiny bit. Before I knew it I was at the top of the hill, buying water to have available when Chandler finally got to the top.

At the top of the hill was an unavoidable tunnel. We pulled over to turn on our front and rear lights and to don headlamps to make sure everybody could see us. When there was a lull in the traffic, we headed in. The tunnel was no big deal at first, but then the light faded to complete darkness and I couldn’t see anything. I was going slower and slower because I was afraid of running into the curb on the side and falling. At that moment, a few motorbikes came up behind us and lit the tunnel up as a semi approached from the other direction. Once they passed us, we could see light from the other end of the tunnel and peddled as fast as possible. Long, unlighted tunnels are scary and must be avoided at all costs.

Once safely on the other side, we had a small snack before enjoying a massive 22km downhill. It was a perfect downhill too- very little traffic, nice grade and pavement and above all, no headwind to slow us down.  At the bottom of the hill was a town, so we stopped for a snack. I had pineapple, Chandler had a spicy papaya salad. He really wanted soup, but instead of the normal noodle soup, this one had big spoonfuls of clear gelatinous substance added to it instead of broth, which looked really revolting. The papaya salad was over the top spicy and not that filling anyways. We figured he would find something else along the way to finding a campsite. 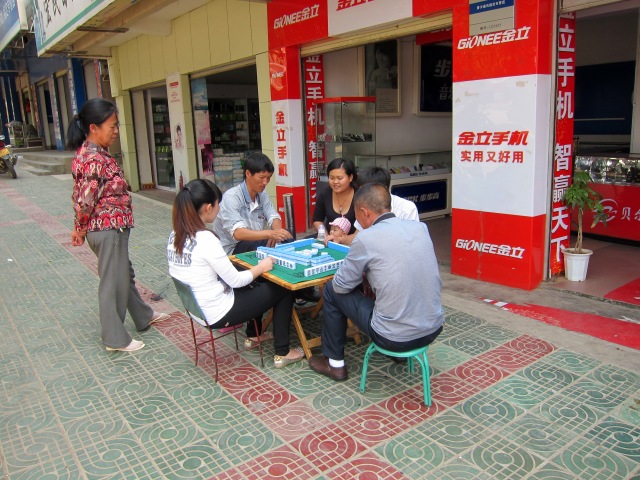 We were so wrong. Instead we ended up in a river valley which channeled the wind directly into our faces. As we labored to maintain speed and positive attitudes, Chan was becoming more and more hungry. We were looking at the GPS and the map seemed to show that we were following a river down to the next town, instead it turned out that we followed the river until it met another river coming straight back along the same path. The two rivers butted into each other at 180 degrees and the confluence discharged through a notch in the mountains into what looked like a tributary on the map.

So we started climbing in addition to battling the headwind.  Now Chan was starting to get really snappy and I suggested we stop to have a snack. We were running low on food, so we just ate some fruit. I wanted to get out the stove and make ramen. Chandler did not want to spend the time making food, with only a couple of hours of daylight left and a ways to go before we got to the next town that would definitely have food. Soon, we were in the middle of a pretty big fight which ended with us on our bikes not talking to each other.

The silent treatment lasted a few more miles before one of us complained about how much the wind sucked and the other agreed. We had both been keeping an eye out for suitable campsites, but there was the river one side and a cliff on the other. As each mile rolled by, it became obvious we were going to have to just keep going until we got to the next town. We reached the end of the narrow river valley and abruptly turned north, and suddenly the heavy headwind turned into a huge tailwind. We were racing along at 17 mph without much effort, it felt amazing. 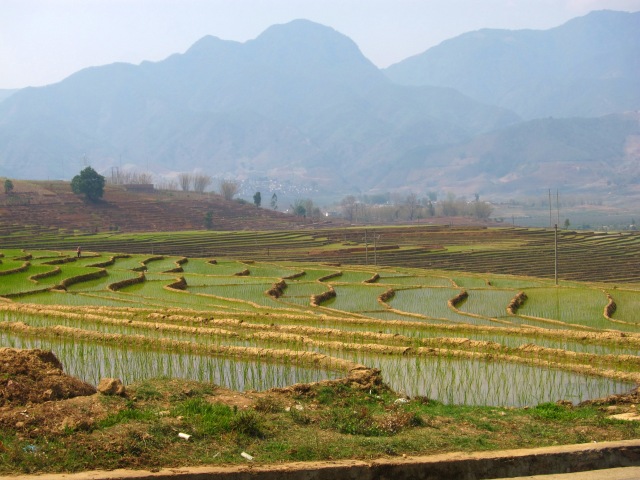 Rice paddies have a calming effect

We made it to town just as the sun was setting.  After the usual post bike routine, I watched English news and made ramen while Chan went out in search of food. He found a noodle stand near the hotel and had two gigantic bowls of noodle soup, a beer, a bottle of water and a sprite as his recovery meal. He also came back with a present, a bottle of wine because we ended up cycling 70.3 miles today, crushing our old record.

I am not interested in a repeat anytime some.

5 comments on “The day that Jenny beat Chandler”