We woke up with the sun and to the sounds of footsteps outside our tent. People were curious about us, the bikes and the tent. The officer from the night before came over to say good morning and asked us how we slept with his hands. I packed up everything inside the tent as Chandler prepped the stove and began breakfast. Once we started cooking some potatoes a group of women, their children and a few monks walked past us to the pond. One of the monks spoke English and asked us about our journey. He also explained to us that the women were interested in our stove because they had never seen anything like it. 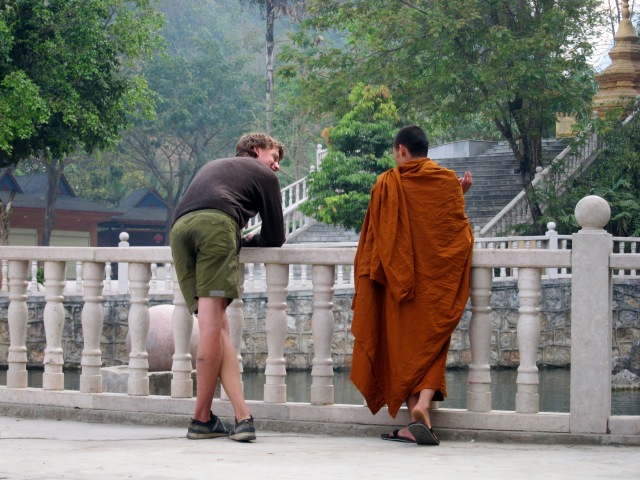 Chandler and the monk

Eventually, their curiosity wore out and we were left alone to enjoy our meal. With a decent ride ahead of us, we prepared a large breakfast including potatoes, oatmeal and coffee. After cleaning up the pans and the rest of our campsite, we joined the group at the pond to watch people feeding the fish. The English speaking monk returned for a chat and invited us up to the temple for lunch, which we gladly accepted. Lunch wouldn’t be for few hours so we took our time packing and just hung out relaxing.

Around eleven we biked over to the temple, which was conveniently next door to the park. We were shown the temple and then guided to the back where the monk’s rooms are located. A low table was set up with fruit and snacks for us and we were offered tea and beer. We were surprised to learn that the monks were from Lao and allowed to eat meat while in China (but specifically not tiger, elephant, snake or dog). The Chinese monks do things very differently than the rest of Southeast Asia. 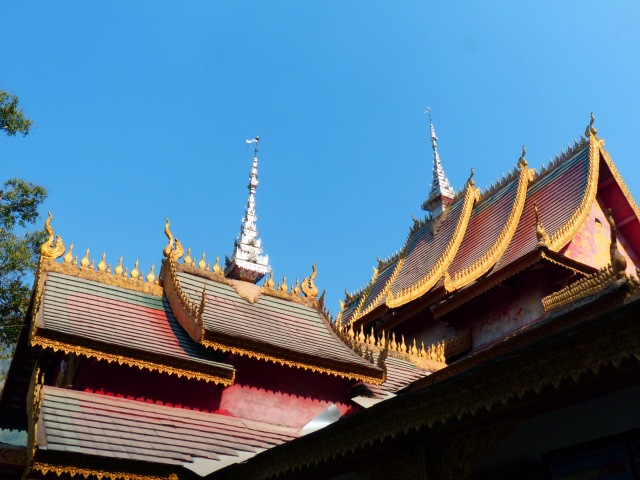 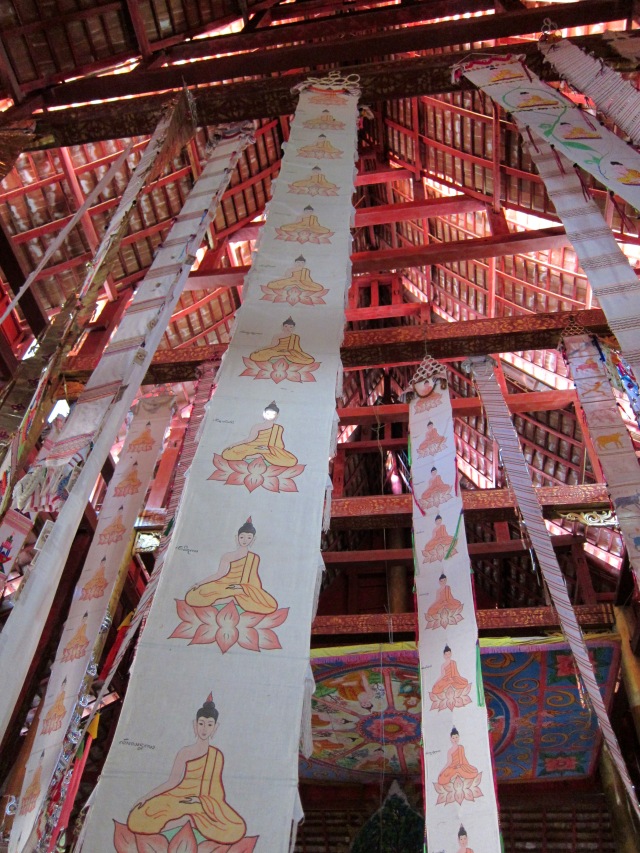 Banners inside the temple

As we sipped our tea and beers, we were entertained by a younger monk while everyone else hustled around cleaning all the rooms. We talked about where he was from and answered any of his questions about our lives. We went over how to say various words in English such as wall and window and the equivalent in Lao. We also learned that the monks get to choice what color garment they wear, between red, different shades of orange and brown. After about an hour and a half, lunch was ready. We were brought into a room off the kitchen and presented with two tables set with many different dishes. We sat with the monks who invited us for lunch, the one who entertained us and a few men from the village who came by to help clean. 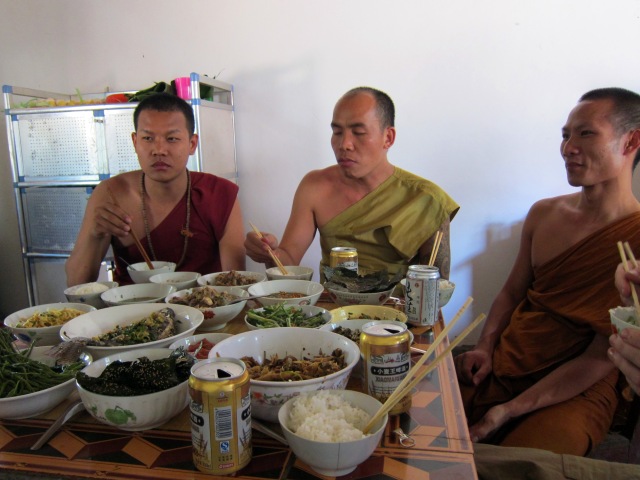 A number of beers were pressed upon us, but we drank very slowly as we still had several miles to ride later. Everyone was very friendly, but we could only really communicate with the two monks. We were offered the choice pieces of meat, which they gave to Chandler after they understood that I am a vegetarian. There was a lot of rice, dried river moss and some other green stemmed vegetable that was really tasty. Chandler ate several different variations of mystery meat.

When everyone had eaten their fill, it was time for a second beer and smoking. Chandler and I do not smoke cigarettes but intrigued by what the men were doing. The locals were smoking their cigarettes out of long acrylic bongs which neither of us had ever seen before… Finally, the time had come for us to continue on our way. We bade everyone goodbye, snapped a few pictures and left. 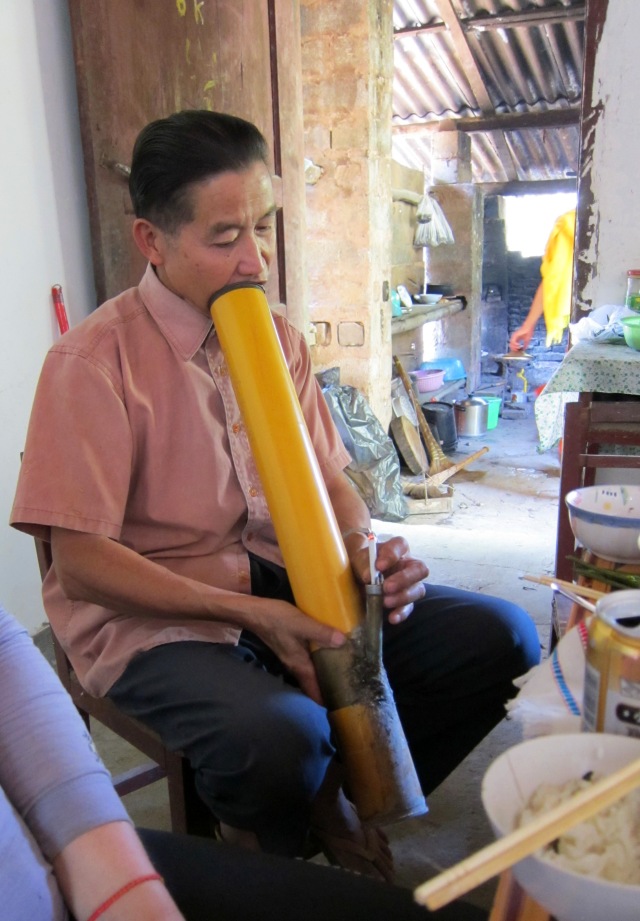 That’s one way to smoke a cigarette

The rest of the day was nice, even though we started really late, in the heat of the day. We continued on the old highway, which had almost no traffic and ample shade. It felt like we were riding on one massive unpopular bike path. There was another big pass to climb and descend. We passed by a number of banana plantations with the bananas all wrapped up in layers tissue paper and plastic bags. We reached Menglun around 3 pm and checked into the nicest hotel the city had to offer, also the only hotel we could find with enough room in the lobby to store the bikes. 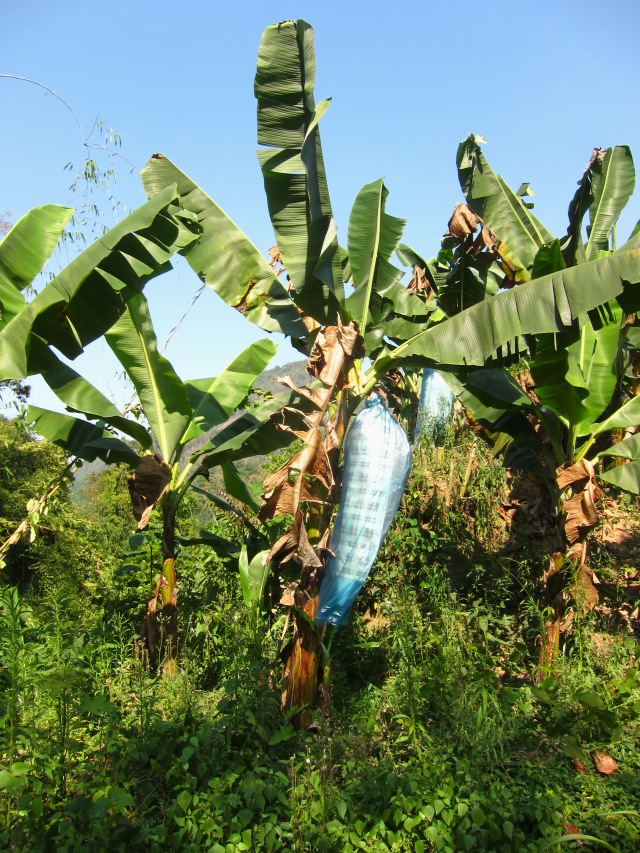 All the street food was meat in one form or another, so we went to the supermarket and decided to try some American classics, but Chinese style: potato chips and cookies. There were tons of other products in the store, but we couldn’t figure out what most of them were. The cookies were supposed to be similar to Oreos but tasted like very burnt soybean oil and literally had to be spit out in the garbage. The potato chips were corn flavored which we hoped would be similar to fritos but they ended up tasting like artificial creamed corn. Bad, just terrible and weird and very bad. Better luck next time. 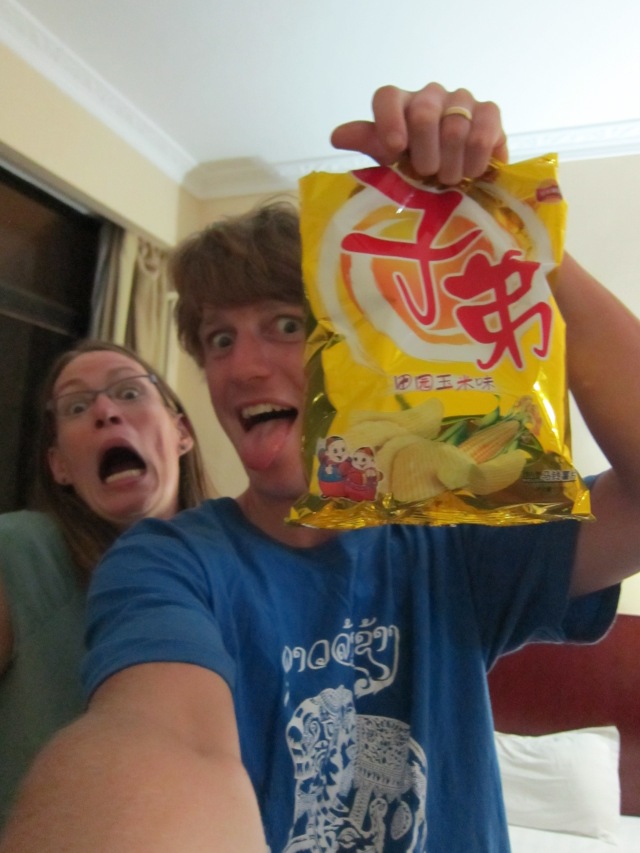 We couldn’t figure out how to work the internet in the room, so we just watched the English language news channel and went to sleep.

5 comments on “Lunch at the temple”