The bus arrived at the Vientiane station a little after 5am. It took us about 20 minutes to get the bikes back together and get on the road. The bus station is a couple kilometers outside of town so we road in as the sun was rising.

We had breakfast at a nice café and waited until the Chinese embassy opened at 9am. We arrived along with a few other foreigners and chatted about the visa process. Everyone else was there for round two or more after finding out they were missing some critical piece of paper. A French guy told us that they were put through the ringer a bit more than other folks apparently because of a row resulting from a controversial state visit to France by a certain regional leader in exile…

The embassy opened at 9am and we handed over our applications and our photographs. We read that they would want two copies of the applications, which we had, but they actually only wanted one. The official quickly looked through all our paperwork, gave us a receipt, instructions to go to the Chinese bank for payment and told us we could pick up our passports on Friday morning. We walked out a little stunned as the whole process only took about 3 minutes. Now we wait, and hope that our applications are in order.

We found the bank on the main road into town and made our payment ($140 each since we’re American, $32 for everyone else).

We found a nice guesthouse and spent the hottest part of the day inside relaxing. For dinner we went to an Indian restaurant and ordered a feast.

After dinner, we went bowling. We used to go bowling in the winter in Anchorage, so it seemed appropriate. It was so much fun, but we were both a little out of practice. The best part was the bowling alley here played the same American dance music as back home. Because it was Chan’s birthday, I let him win all three games. 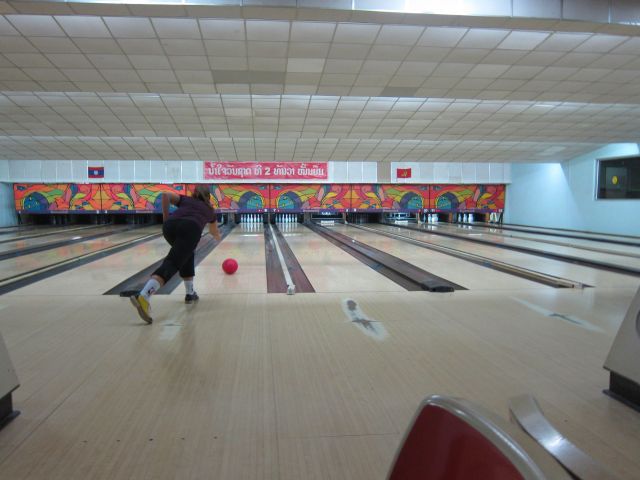 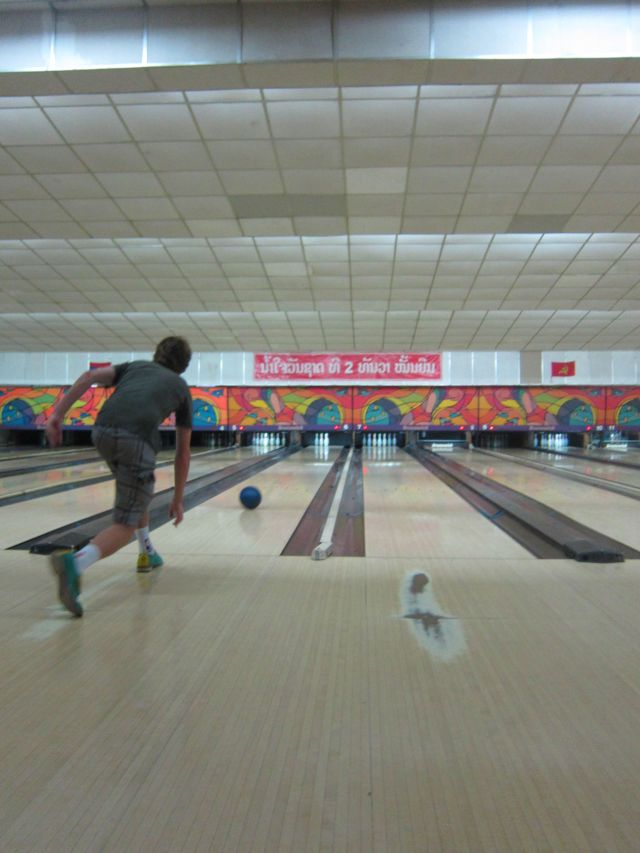 Laying down another strike

We fell asleep quickly and early as we hadn’t slept well on the bus. Around 2am, we are both awoken by a dog, directly outside our window, howling. The guesthouse owners had about 5 or 6 dogs that they fed and kept in the courtyard. The howling lasted a few minutes before a staff member came out and started hushing the dog. The dog then started running around the courtyard howling. The person was eventually able to quiet the animal down to only have it start humping another dog. The humping continued until we both fell back asleep. Then for the remainder of the night, the dog started howling every half hour or so until 5am, with someone continuously and futilely shushing it. It was by far the worst night sleep we’ve had on the trip. Although the place was really nice in every other way, we had to find another place where we could sleep!