Savannakhet does not have a lot going for it. Many of the restaurants advertised in our guide book were closed for the day or completely gone. The town felt like it was hanging on by a thread. After two or three attempts, we finally found a place for breakfast, which left much to be desired.

We knew we would be in the capital of Laos, Vientiane, for a week while waiting for our Chinese and Indian visas, so we decided to take a night bus that night to Vientiane. We wanted to make sure we had enough time to cycle to China and heard the route from Savannakhet to Vientiane was nothing to write home about. Our plan for the day was to go to the dinosaur museum, but we had already missed the morning hours and had read online that it normally doesn’t open for the afternoon hours. So, we checked out of our hotel room and hung out in their courtyard until dinner. Chandler started working on our Chinese visa applications while I read.

Chan had done some research on the Chinese visa application process, and was a little worried. He read that the various Chinese embassies had recently started enforcing the submittal requirements more strictly since the fall 2012. He wasn’t able to find any recent information about Americans who had successfully obtained tourist visas outside the US. He did find a number of posts about people who had given up and changed their trips dramatically because they couldn’t get their applications together to the satisfaction of the Chinese officials. He was able to figure out that the embassy at a minimum required:
-The application (form A),
-A supplemental form (form B) since we were applying outside our home country,
-Photocopy of our passport photo page,
-Proof of exit from China, which in our case was a confirmed flight to India,
-A day by day itinerary for the duration of our stay, done up in Excel,
-Hotel reservations, not sure how many are required, we had 3 total at the beginning, middle and end
-A copy of a recent bank statement showing that we weren’t broke

Some posts also mentioned the specter of a required “letter of invitation” issued by either a Chinese friend or a tour company. We didn’t have this or any means to get one so we hoped it was only required for longer stays…

Chan put in a few hours filling out applications, booking hotels in China and getting all this stuff together, then printing it out to pdf. He found a local shop that then printed the documents out and made copies. This turned into a disaster as they somehow only printed about half of the pages out which he didn’t realize until he got back to the hotel and double checked everything against his list. He ended up having to go back to the shop two more times as their printer and copier kept losing pages of the application. Exhausted from his drawn out clerical duties of the day, Chan was starving. A French woman at our hotel recommended a restaurant that served pizza and had some interesting outside décor.

Working on the visa

Our company at dinner

With nothing to do until our bus left, we biked around town until the sun started setting. At the bus station we had a couple of beers and Chandler had some soup while we waited. When the lights on our bus turned on we headed over to make sure our bikes got on first. 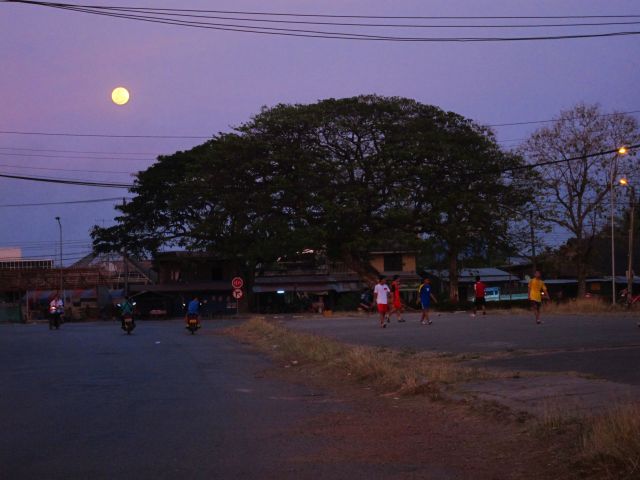 Soccer match under the moon

When we pulled up to the bus, the driver took one look at us and shook his head no. “No bikes.” We showed him our tickets and said “yes” and “no problem” while beginning to take our panniers off our bikes. Chandler then picked up his bike and began loading it under the bus, while the driver stared at him in disbelief. He made a panicked phone call to someone, littered with the word “falang” (just an inoffensive word for “white person”) which Chan heard and repeated a few times to the baggage man. The guy thought it was pretty funny which lightened the mood a bit. At this point they must have realized the bikes were coming with us no matter what and started to help. He insisted we take our front tires off and motioned for Chandler to step aside. Just like that, both bikes and all 8 panniers were loaded on the bus. The driver didn’t even ask us to pay him extra as we had been expecting.

We loaded the bus about an hour later. We were on another sleeper bus, but of a different design. Instead of individual beds, this bus had a bed on either side of the aisle that two people would then share. I could imagine this would be a little awkward if one was traveling alone and had to share the bed with a stranger. The bed was about 5.5ft long and 4ft wide, a little too small for Chandler and me to share comfortably. I accidentally hit Chan in the face a few time while trying to roll over, only there was no room to roll over. Needless to say, it wasn’t the most restful night’s sleep. Little did we know it would be more restful than the next night…