We already knew that we wouldn’t find breakfast in this weird little town so we starting riding right away. Chandler was already hungry (he is usually hungry, or almost hungry) so we stopped at a mini-bus station a few kilometers down the road and he finally got some meat on a stick, which is so common throughout SE Asia. This was a whole chicken leg BBQ’d and tied to a stick. He passed on the skewered BBQ beetles, though they were a steal at 5000 kip ($0.60) for a baker’s dozen of them. Chandler gave the chicken a thumbs up while munching away at it as he rode along. We were also able to catch a big accomplishment on camera, 2000 miles ridden! 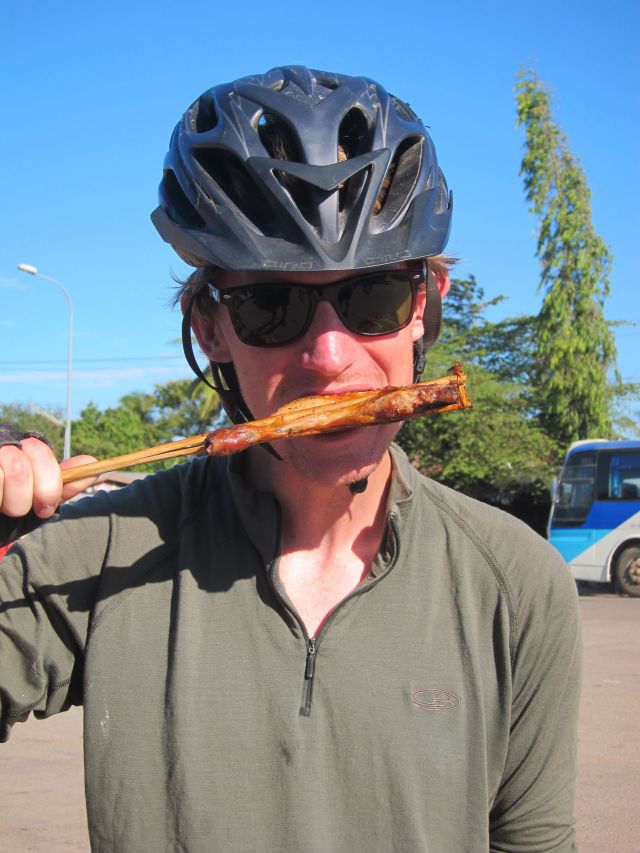 Soon enough we came upon a road sign pointing out a nearby attraction, dinosaur footprints. We followed the arrow off onto dirt road that led us to the river where a number of people were bathing. It wasn’t clear where we were supposed to go, but a friendly man clearly realized why two goofy looking white folks were wandered down his road and pointed up the river. We took turns staying with the bikes while the other went to look at the prints. Someone had spray painted red circles around the prints, otherwise I never would have noticed them. But upon further inspections, it was clear that they were in fact footprints of some sort. Chandler assumed they were velosaraptors, but most of his paleontological knowledge is from multiple viewings of Jurassic Park (AND he read the book), but there wasn’t any information on display, so who knows what made the prints.

Back on the bikes, the road condition quickly deteriorated and we were in the middle of road construction. Not only are crappy roads rough to ride on, but it is very mentally draining weaving around holes and oncoming traffic also weaving around holes. I wasn’t going to make it very far without something to eat and pulled off at the first restaurant. We had our usual breakfast of omelets and steamed rice (no coffee, so a pepsi was offered and accepted, $2.50 total) and were now more ready to tackle the construction.

The construction lasted for about 20 miles when we reached a town with a guesthouse. It was hot out and the sun was broiling me alive. I made a comment to Chandler about stopping for the day, but he didn’t think I was serious. At 130pm, with 20 miles left, we hit another town with guesthouses. I made another attempt to stop for the day. At this point, we got into a bit of a disagreement. I wanted to take a break until it wasn’t so hot. Chandler wanted to either stay where we were in the little crossroads town or continue to Savannakhet. He didn’t want to take a long break and end up riding into a city as the sun was setting. Somehow it was decided we would get something cold to drink and figure out what we would do then, stay or continue. I pulled up to a place, but they only served beer. I was so hot, miserable and pissed off I continued to ride right out of town. I was pretty far ahead of him when I felt something hit my arm hard. I looked down and might have given off a girly little shriek, stopped and waited for Chandler to get the thing off me.

That helped lighten the mood. We found a store with a cooler off the road right away and had a cold drinks and some ice cream. We were both feeling much better and ready to finish the ride to Savannakhet. We rolled into town a little more than an hour later. We found a guesthouse, took showers and checked our email. We were both happy to be in a larger city, it had been a week since we had access to the internet.

Finally made it to town

We set out for dinner pretty quickly after getting settled. The café we originally wanted to go to was closed, so we wandered around for awhile. We read that Savannakhet was quiet and not very touristy, but this was a bit of an understatement. The place was really quiet with parts of town feeling abandoned. Our Lonely Planet was outdated with most of the places listed to eat, not there anymore. We ended up at a French restaurant, which we later found out was the most expensive in town. It was worth it though. We got rolls with real butter and a big fresh salad. I had a bunch of small vegetarian morsels like stuffed tomatoes and a potato croquette, Chandler had tender beef served in a wine sauce. The meals were awesome, total bill $19. Budget blown, but feeling great we ended the evening with a walk along the Mekong River as the sun set. 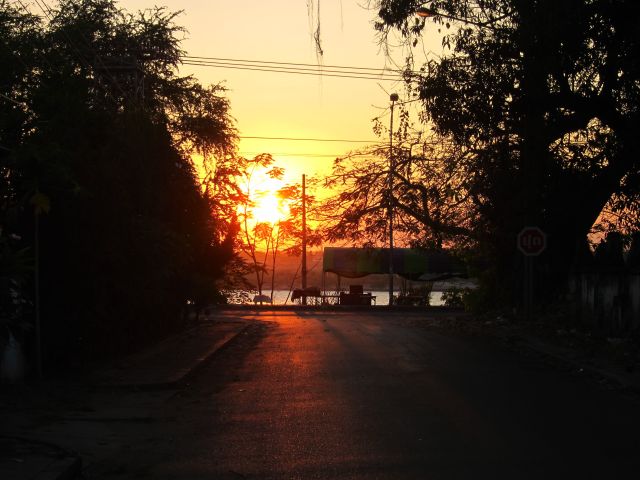 6 comments on “Long ride to Savannakhet”