If we weren’t so intent on getting out of Vietnam, we would have hung out at the hotel working for another day. We got up early, dressing in clean and dry clothing and tried to find breakfast. Again, we went to three or four different restaurants asking for bread and eggs. No, just the lovely grey chicken soup. How is it possible that there is only soup? We had no problem getting eggs and baguettes everywhere else, but not here in this strange place. We were both so frustrated with the situation- we just hoped there was something over the border.

We headed to the border and were immediately descended upon by the money changer women. The Laos visa is $35 USD per person which should be paid in US dollars for the best rate. Chandler was prepared to deal with ladies, knowing the current exchange rate and having a high end he was willing to sell our Vietnamese Dong for some bucks. The first offer was for 2,500,000 Dong for $80 USD. This is about $125 so, their first offer was a $45 overshot. Chan made a brief attempt at getting them close to the real exchange rate which yielded $5 deduction, which might as well have been a shot across the bow for Chan who had completely lost what little patience he had with this sort of thing after a few weeks in Vietnam. He gave them a polite “thank you very much” and pedaled off while they desperately and futilely called off counter offers. We’d have to deal with the official’s exchange rate, which couldn’t be worse than dealing with the scammer ladies at the border. 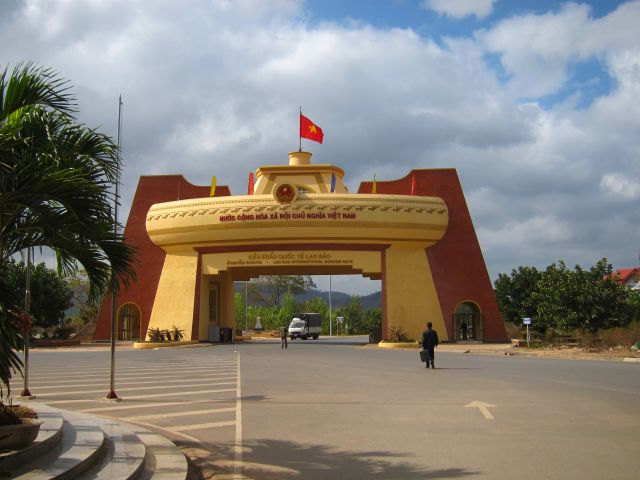 Getting stamped out of Vietnam was pretty straight forward. We tried to go through the wrong gate only twice, but everyone was pretty cool with our incompetence and we finally ended up at the right booth. The guard studied our passports quite intensely, then took them into another room for a while before returning them and allowing us to walk out through no-man’s land and through the Laos gate. The Lao visa upon arrival desk was deserted so we waited, and waited. There was a small group of women selling pirated DVDs, books and candy on one of the waiting benches in front of the border station. One of them encouraged Chan to push the sliding glass window open to grab the necessary paperwork we had to fill out. After we filled it all out, there was still no one in the office. Chan walked to the immigration office, but they were too busy playing solitaire on the computer to acknowledge him. We spotted a bank right across from the station on the Laos side and since no one seemed to care what we were doing, Chandler walked over and exchanged our Vietnamese Dong to USD and Lao Kip. The Lao tellers were super nice and even spoke some English. They exchanged the money at nearly the exact rate, and we basically only lost about 20 cents from the rounding. While he was away, I noticed an older man who was perusing the DVDs, selected a porn and then participated in a detailed discussion about his new film with one of the sales ladies. 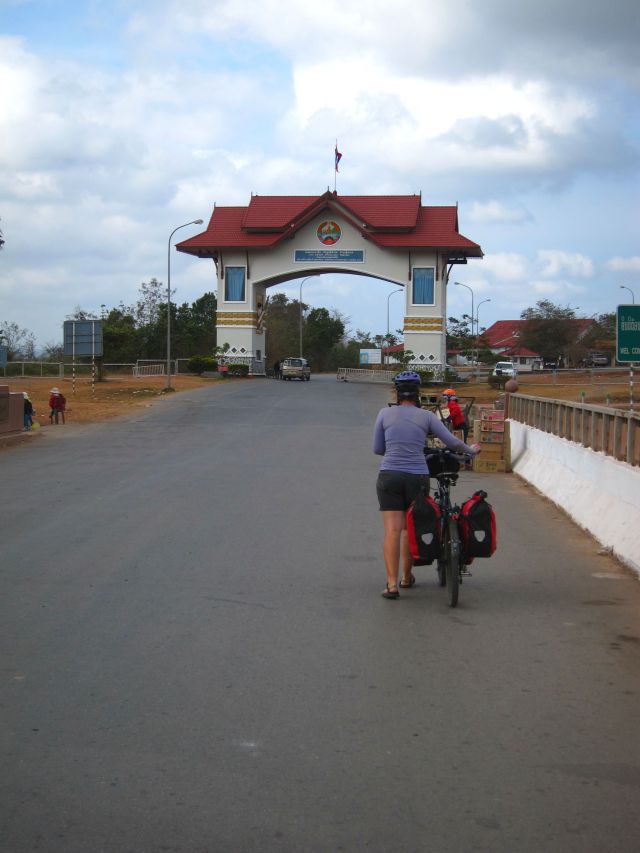 Eventually, the official returned to his desk and gave us our Laos visas with zero trouble and we were on our way. There was a little casino right on the border with a restaurant that was open. We immediately sat down and had a delicious past due breakfast of Thai style omelets over rice. We ate quickly as we were excited to be in a new country.

The differences between Laos and Vietnam were obvious right away. There was less traffic and it was blessedly quiet. The affluence was gone but the people were much friendlier. We were immediately bombarded with smiles, “hellos” and “sabaidees” from everyone. It felt like a leaden vest had been lifted off us, with the constant traffic anxiety gone. Shop keepers were friendly and gone was the suspicious banter between the proprietors when we asked how much something cost. 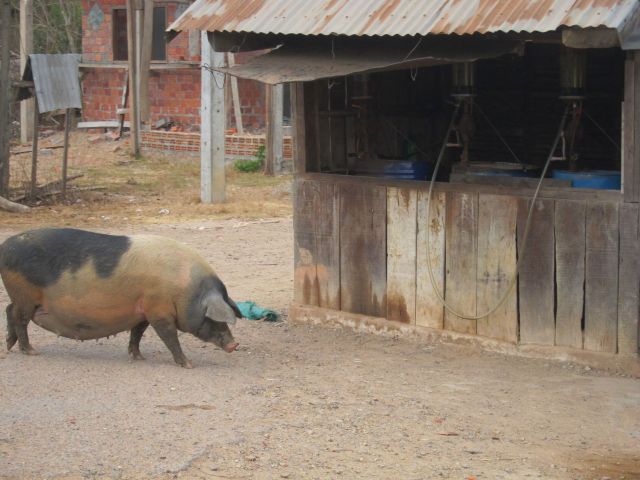 Giant pig at the gas station 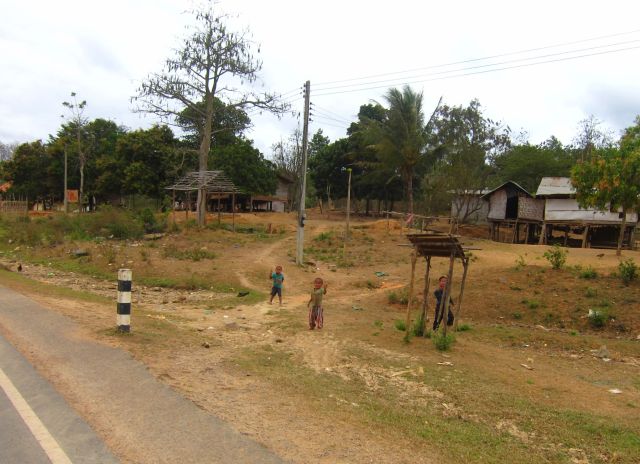 Sepon wasn’t too far from the border, so we arrived in the early afternoon. Chandler had read an old blog that said there were only two options for lodging, but that info was clearly dated. We had at least a dozen of guesthouses to pick from. We found a brand new one on a side street that was still partially under construction. For $8, we had a brand new tiled room, with spotless white sheets and a huge comforter. There wasn’t any wifi, but this place ranked with one of the absolute cleanest placed we’ve stayed so far. 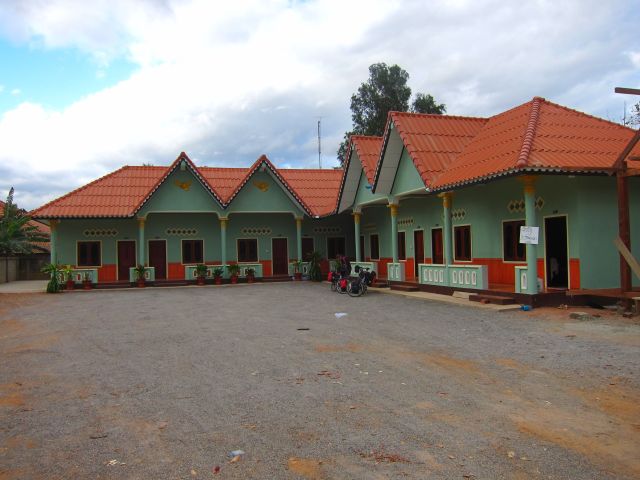 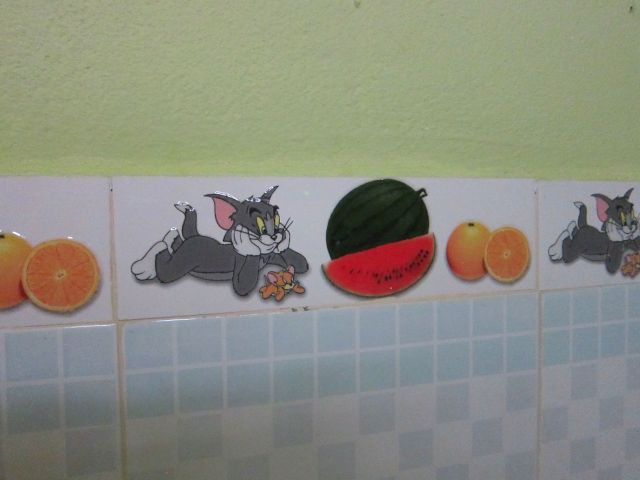 We went through the normal routine of showers and relaxing before setting out in search of dinner. The first restaurant we went to was run by a Vietnamese woman who was not friendly and not interested in helping us. We got a little worried about what Laos was going to be like from the encounter with her. We walked up to the next restaurant and they ended up being really great folks.

I had kept my sign that Areeya made for me in Thailand on very first day of biking. Apparently the Lao written language is similar to Thai and the Lao people watch a lot of Thai TV, so we figured the restaurant owner would be able to understand my sign. My sign says: I am vegetarian, but I eat eggs, shrimp and fish. This means people interpret how they want to. The owner made us fried rice with veggies, egg and squid. Chandler loved it, (he declared it the best squid he’d ever had, not sure how much squid he’s actually ever had…) but I had a little trouble with the chewy texture and was not able to eat it all. It was still a very filling meal, and very cheap.

We left feeling full and happy to be in Laos. We really felt released from a lot of tension we had been harboring, and were so happy to be in a new place with really friendly people. We spent the remainder of the evening watching a show on Chan’s computer and reading.