The border town of Lao Bao is only 19km away from Khe Sanh, so we took our time getting started in the morning. That meant sleeping in! Our hotel was a little on the dirty and creepy side, so we didn’t linger too long after waking up. We figured we could find something to eat on the way out of town. There is a large hotel in town that was mentioned on some of the hotel review sites, and is apparently where most of the package tourists get booked. We swung in there for breakfast. Chan walked into the dining room to see if they were open and found about 8 employees lounging around, some even laying on the floor. He made the international eating sign which consists of miming shoveling food into one’s mouth which was met with confusion, then shouting. It turned out the employees were trying to summon someone who could speak English. When she entered the room, Chan repeated his mime, and said “breakfast”, to which the lady shook both her hands in the Vietnamese way of saying no, and said “no breakfast”. We left a bit puzzled, looking back at the pack of lounging employees behind the glass window with the English words “breakfast café” written in decals.

We rode on and soon we were out of town. The riding was pretty much all downhill with a tailwind. We came across a North Vietnamese tank on display, which acted as good enough windbreak for us to eat a breakfast of Ritz crackers, peanut butter and processed laughing cow cheese out of our food cache.

We rolled into Lao Bao maybe half an hour later and checked into a really nice hotel (Bao Ngoc, $13 highly recommended by us) which was recommended by someone on Crazyguyonabike.com, who stayed at the hotel next door and wished he hadn’t. Our first order of business was laundry. After the last two days of riding, our clothes was absolutely disgusting and in dire need of washing. We washed them in the sink with the fluid that looked most like soap in the two bathroom dispensers (after consulting our bottle of shampoo, we later realized we had washed our clothes with dau goi, not soap so we lost the 50/50 bet, no matter it did the trick) We strung up a line on our balcony and the clothes quickly dried in the strong wind.

Those probably didn't need to be cleaned

With our chores done, we went out to find some food. We must have gone to 5 different restaurants and every single one was selling the exact same noodle soup. So, Chandler decided to have some soup while I ordered air. The woman running the stall took a boiled grayish looking chicken off a hook hanging in a glass case and hacked off one of its leg. She then smashed up its leg, bone and all and put it in a bowl full of broth, noodles and greens. I was suddenly very happy with my choice of air and we joked about the bout of food poisoning Chan would be dealing with later. Chandler smiled grimly as he slurped his chicken leg soup. Next, it was time for some coffee sua da. We figured it might be one of our last, and it turned out to be pretty good, fresh brewed from a little metal coffee filter they have that drips over a glass of condensed milk.

I wasn’t hungry so we went back to our room to get caught up on the blog. Chan continued to explore Lao Bao in order to resupply our food cache and to try and buy some US dollars to use to cross the border the next day. The town quickly revealed itself as a sort of post-apocalyptic bizarro-world. The town had seen an influx of cash in the early 2000’s as the Vietnamese attempted to pump the place up into an important special trade zone. There were several pretty huge shopping centers built, but apparently there were some bureaucratic problems with the actual economic incentives for consumers, and the place started to slowly die due to a complete lack of customers. While we were there, two of the three big shopping centers were vacant caverns, and the last was a depressing expose of merchants selling laundry detergent, booze, rice cookers and processed food like chips and snack cakes. We were unable to find any tuna fish or peanut butter, and fared rather poorly finding much else, with not a baguette in sight.

Chan’s next objective was to find some US Dollars so we could pay for our visas at the border. He visited all three banks in town and came away empty handed. The tellers apparently all looked at him as if he was asking them to sell him commemorative US quarters or something. He became mildly frustrated at the last bank, because they had a large digital display behind the tellers that showed the current rates that the bank bought and sold US dollars, but refused to exchange his Vietnamese money at any rate. He found a teller who spoke some English who explained that the bank could only buy US dollars, but was forbidden to sell them. When asked where he could buy US dollars in this town, she cheerily said, “oh at the border, there are many people selling dollars at the border”. Wonderful, the bank teller was telling him that he had to resort to the black market to get funds to cross the border.

He returned to the hotel obviously a bit pissed as he had just spent about 2 hours riding around accomplishing nothing in this strange town. It was clearly time to enjoy a beer or two and work on the blog together. We worked pretty hard and were able to finish up three entries. We have a good workflow set up for the blog. I take notes every day and then write the entries based on the notes as we go. After I work up a full draft, Chan then edits and/or adds to what I have written while I process the photos. I then add the photos to the text and publish everything online. 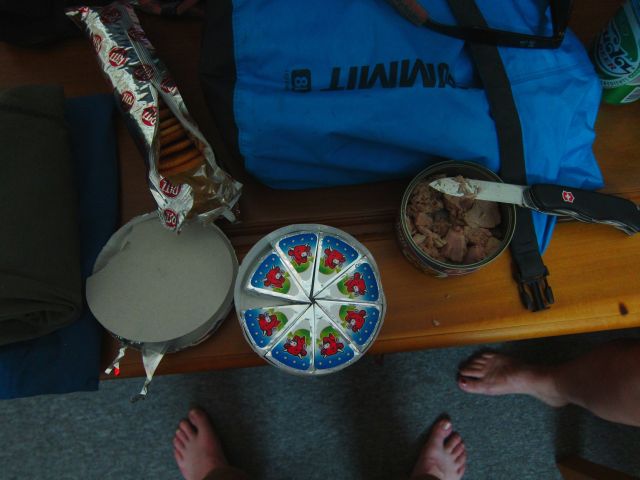 Neither of us was interested in repeating the process of wandering through town looking for dinner. So, we had Ritz crackers, some canned tuna, and laughing cow cheese for our main course and Oreos for dessert. (While Chan was returning from his disastrous errands duty he saw a small case in the back of the hotel stairwell that had a random assortment of toothbrushes, tissues, etc and three packages of peanut butter/chocolate Oreos which he scooped up immediately, a major highlight of our stay in Lao Bao) We ended the night chatting with Chandler’s family on Skype and excited for crossing to Laos in the morning.