The purity of our cycling trip has been broken again. We cycled from Rayong, Thailand to Saigon, Vietnam, then took a bus to Dalat. After riding down to Nha Trang we looked at the map and realized again, that Vietnam is pretty big. Our visas expire on the 24th of February and there is still a lot of country to see. Chandler has been feeling pretty bad, and dragging while cycling in the heat. He really needs to rest if he is going to get better. We read a number of accounts online from people riding down highway 1, raving about the very strong tailwind headed south. (Good for them!) After a brief amount of consideration we decided to fast forward to Danang, a port city in central Vietnam.

Our hotel called around and found that it was impossible for us to travel with our bikes north because of Tet. They could book us on a train, and send our bikes as cargo on a bus a few days later. We were pretty much out of options at this point and decided to go ahead with the somewhat sketchy plan. We gave the lady at the hotel about $60 and hoped for the best. Later that evening she gave us two train tickets.

At 5am the next day, the a taxi picked us up at the hotel and delivered us at the train station without our bikes. The hotel was going to handle sending them north for us, which, needless to say was a bit stressful for us!

Finding our train and car at the station was straightforward, but finding our seats was another issue. The doors were only open on the end of the car furthest from our seats . We had to get our 8 panniers and 2 handle bar bag “purses” through an obstacle course of people and things. There were about 4 people laying on the ground sleeping and a huge pile of vegetables, all in the middle of the aisle.

I managed to step on only one person and we got settled quickly. The train pulled away from the station and we had only one person sharing our seating area. At the first stop, he left and a family took his place. The patriarch and model father of this family unit had absolutely zero concept of a personal bubble. He would extend his legs out physically forcing Chandler’s into the aisle then refuse to move when food vendors wheeled their carts by, forcing Chan to hover until they passed. He put his feet up across the space between us, resting his nasty socked feet on our seat against Chan’s hip. He also had a little routine he was quite proud of, where he would drink an entire 12oz bottle of water in one gulp then triumphantly toss the bottle out the window.

Bored on the train

The trash is something that has really bothered us about Vietnam. The landscape is generally gorgeous, but the sides of the roads are strewn with garbage. At home, in the US, there is a lot of trash of the side of the road too, but here there is such a flippancy associated with littering, it drives our western minds a little bonkers. Water bottles out the train window, no big deal. Finished with a soda? Toss that can in the bushes! Driving down the road in your Lexus? Styrofoam takeaway container out the window!

The guy even tried convincing me to throw our yogurt containers out the window since they were cluttering up the little table in our area and he seemed a little shocked when Chan got up and tossed them in a trashcan less than 20ft away. (Who knows where the trashcan waste goes after that, but at least we’re trying) What makes this place truly bizarre is that people are borderline fanatical about keeping their personal areas clean, constantly sweeping in front of their homes and businesses, even the sweeping the street in front of where they live, but there is no problem absolutely trashing communal or “public” spaces. Unbelievable.

Just enough space to throw your trash out

The toilet on the train was a hole in the floor, with everything emptying directly onto the tracks. Each car also had a freshening up room with just a sink. We saw a number of people take their children into these rooms to pee on the floor. With no drain, the pee would drain out into the aisle as the train shifted. No five second rule here.

The other aspect of the train we despised was the cigarette smoke. For some reason, people would smoke between the two cars were there were no windows. The smoke would then go to the closest window to escape which was ours. Gross.

When the litterbug family left, Chandler and I had the two benches to ourselves for the remaining 6 hours. It was nice to be able to stretch out a bit, but the seats were extremely uncomfortable. Basically, we sat on wooden park benches for 11 hours. 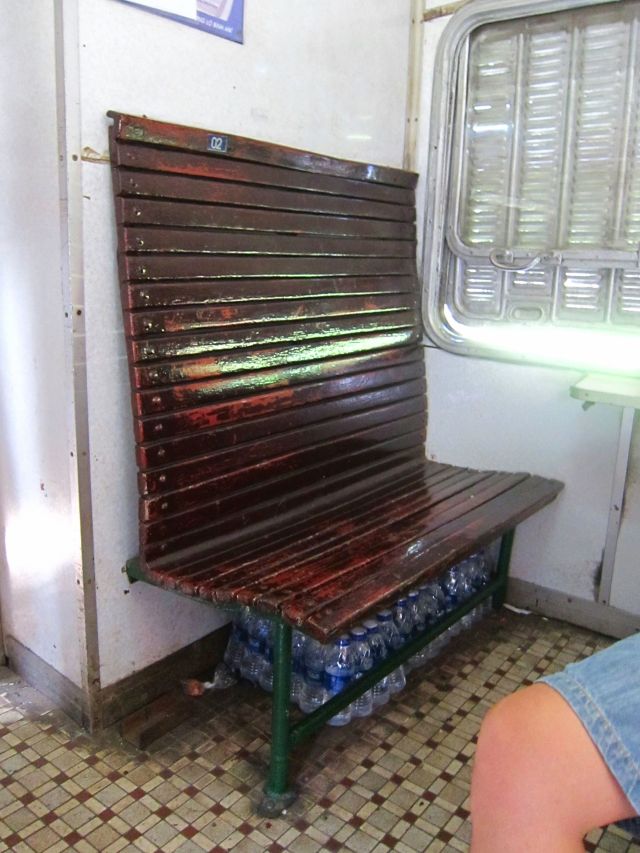 As much as I’ve just complained, the train ride wasn’t all bad. We read the entire time. We both started and finished an entire book. The scenery was beautiful. Lots of mountains and rice fields. It is incredible how Vietnam is so green. We were also reminded exactly why we like riding our bikes so much.

We hailed a taxi when we finally got to Da Nang and got a hotel near the beach. It was a ways out of town, but worth it because it was so quiet. Once settled, Chandler received an email from our hotel in Nha Trang that our bikes were on a bus and we could get them at 6am the next morning from the bus depot! Awesome!