We had our usual set of chores to complete while in a city but we decided to leave those for the afternoon. First, we visited the Tuol Sleng Genocide Museum referred to as S-21. In 1976, the Khmer Rouge converted a high school in the middle of Phnom Penh into a prison and interrogation center. Warning- this post is a bit depressing!

The people brought to S-21 were photographed and usually starved and tortured in order to extract to confessions of “crimes” they had committed against “Angka” which was an ominous term for the “organization” that controlled Cambodia during the dark period of the mid to late 1970’s.

The record keeping at the prison was meticulous and the confessions that people were forced to sign were elaborate but usually very obviously contrived. Of the few dozen example confessions on display, most prisoners admitted to being agents of the CIA or KGB and most “crimes” were associated with spreading counter revolutionary sentiments and burning rice fields or supplies. There was a confession from an American citizen who had been captured on a boat off the Cambodian coast while supposedly intercepting radio transmissions from inside Cambodia. It was not clear what his fate was. Some prisoners were photographed again if they died at the facility. Many were executed in killing fields outside the city. Of an estimated 20,000 prisoners there were only an estimated 200 survivors including 7 who were freed when the Khmer Rouge abandoned the prison as the Vietnamese invaded Cambodia in 1979.

The museum was very simple, with pretty limited interpretive information, but a number of relics from the original configuration were left untouched, such as makeshift cells and bedframes used for torture. 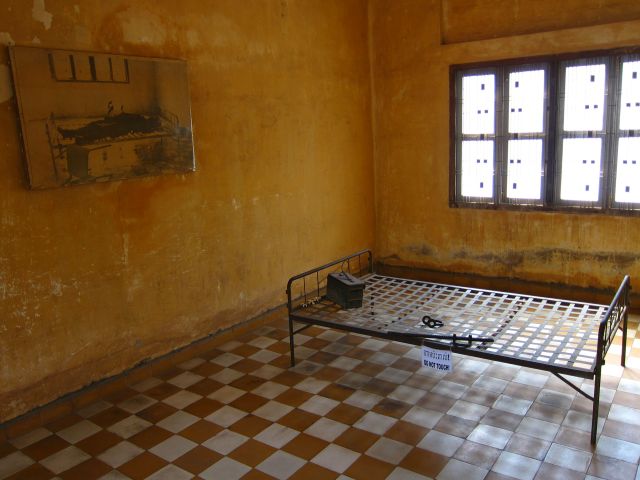 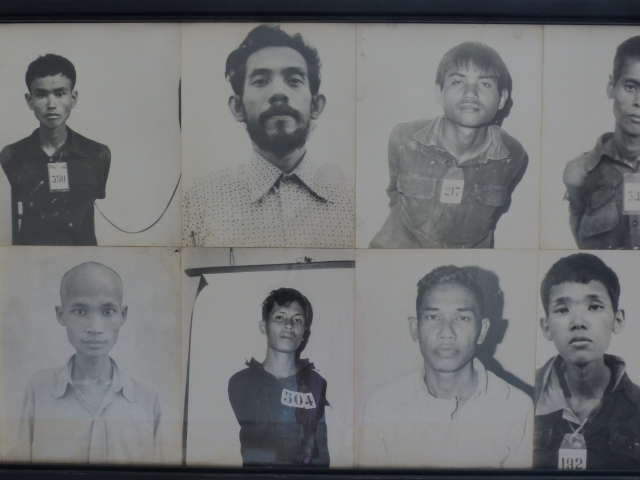 It was a very sobering experience and gave us an idea of what some of the Khmer people had to go through. I think one of the worst parts were the photos of the victims, especially the children.

After a couple hours at the museum, we were both pretty stunned and weren’t up for a tour of the killing fields. We decided to get our errands done. Chandler broke his Kindle e-reader when he accidentally dropped his bar bag and the Kindle got smashed inside, so he was in the market for a new one. Luckily, it wasn’t the tablet or one of the cameras.

We went all over town looking for one, managed to complete everything else on the list, but no Kindle. Chan is now relegated to photocopied books on local history or used Danielle Steele and other pulp classics. We dropped off our bikes for a cleaning and to have someone look at my bottom bracket to figure out why my bike clicks. After walking around for a hour in the heat, we decided to take our first tuk-tuk. Finally, we ended up at a mall and in an arcade. For some reason there was a ban on photography in the arcade, so no pictures, but we had a really good time playing video games and ended up with a pretty decent crowd gathered around us watching us play. $2 kept us busy for a hour or so. 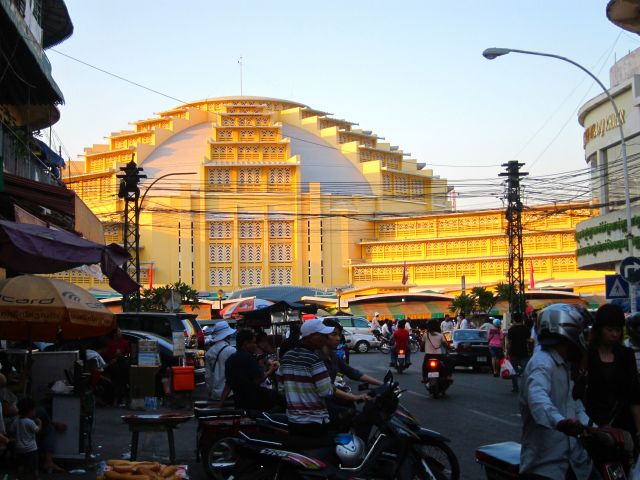 We spent the next day relaxing and planning our route through the rest of Cambodia. We didn’t venture too far from the hotel.