After a quick omelet breakfast (bacon and eggs for Chan), we hit the streets in the middle of rush hour. The traffic wasn’t bad, but requires extra concentration and is always slightly stressful. Phnom Penh traffic has a little more of an anarchic feel than Bangkok, for example, there are many uncontrolled major intersections that at first appear to be absolute traffic jams, but everyone weaves their way through slowly without bumping, crashing, yelling, or really even using horns much.

After an hour of biking, I was really ready to be done but we still had 65km to go. While the road was paved and very flat, the constant headwind and monotonous landscape was getting to me.

Once the foul mood hit, I cultivated it. I started thinking about how I hated biking long distance and how exhausted I felt. My rear felt like I was sitting on sandpaper. I wished we had taken the bus to Sihanoukville. I hated pretty much everything.

Suddenly, Chandler yelled to me that I had missed the small sign marking the turn off for the home stay we had found on our route. We traveled about a kilometer down a dirt road in the midst of rice fields to a quiet courtyard. The owner was quite surprised to see us, as most guests book ahead of time and are either dropped off by a local taxi or brought in by the owners themselves. They were quite stunned that we were able to find them, but we had marked roughly where their road was on the GPS and Chan was watching closely for their tiny hand painted sign.

The owner must have noticed something else because she told us to go clean up and asked her sister to make us lunch. Lunch was fabulous. Huge piles of rice, veggies, tofu, omelet and fresh fruit. Now, everything was better! I knew I would have tough days like this, but the important thing was that at the end of the day, I’m still happy we are on bikes. I’m glad not to be stuck in some bus, being whisked through everything between the big cities.

The owners only had one other couple as guests- some friends from New Zealand staying with them, so it was nice and quiet. The owners are both teachers and have an English class that they teach at their house. They asked if we wouldn’t mind talking to the students to help them practice their English. The students were all between 17 and 20 and a fun bunch to talk to once we all got over being shy. We talked about Alaska, bike touring, our families, what they do for fun, what their career goals where, what we do for a living, what they study, and all sorts of other things. A few of them also took turns riding around on my bicycle, which everyone found amusing. 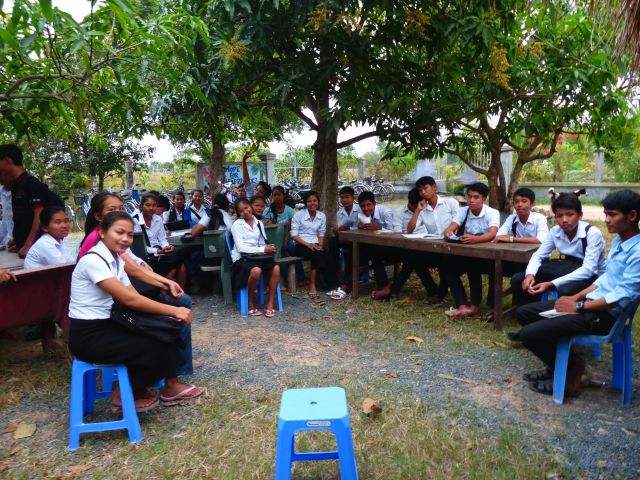 After talking with the students for an hour, dinner was ready. We had a nice family style meal with everyone. The owner was a bit embarrassed because she had already planned a “western” meal of spaghetti and garlic bread not thinking that they would have guests, but it was very good, and a perfect dinner for cyclists. We had a traditional Khmer desert of sticky rice flour ground mixed into a paste with coconut milk and wrapped around a center of palm sugar and peanuts, which is then steamed in a folded up banana leaf. It was very tasty and we both had seconds. Apparently palm sugar is derived from “sugar palms” which don’t have coconuts. The sugar palm guy (for lack of a better term) climbs the tree and makes a precise cut near a new flower on the tree and hangs a bamboo bucket which collects the “sap”. After it is collected, the sap is reduced with heat into coarse sugar- kind of like maple syrup!

We chatted with everyone for a while after dinner, but we both got sleepy pretty quick and decided to retire early to ensure we were well rested for tomorrow.