We woke up feeling good and decided we could finally try to leave town. We had intended to stay three days, and were there a week. Half the hotel staff came out to say goodbye. They also gave us two beautiful scarves as presents! If you are ever in Siem Reap, stay at the Ta Som guesthouse right on the highway. Very friendly, helpful staff and free breakfast.

The owner of Ta Som told us there is a guesthouse in Kampon Kdei, so that was were we decided to go. Once we were out of town, a loud clicking noise started coming from my bike, consistent with each peddle stroke. I had heard it before Siem Reap, but it wasn’t especially noticeable then. Chandler took a turn riding my bike, checked the derailleur and tightened the crank, but nothing helped. Without a great place to dismantle the bike we pressed on.

What are they collecting?

The guesthouse in Kampong Kdei was easy to find and for $5, the price was right. Chandler went to get us something cold to drink and I tried to take a shower. The water was cold, so I washed all the sunscreen, sweat and dust off my arms when everything started to smell kind of funny. I put my face under the water and suddenly I could place the smell. Pee. The water smelled like pee. Awesome. Now I probably smelled like pee too. Guess that is enough shower for me. Chandler opted to just take one the next day. 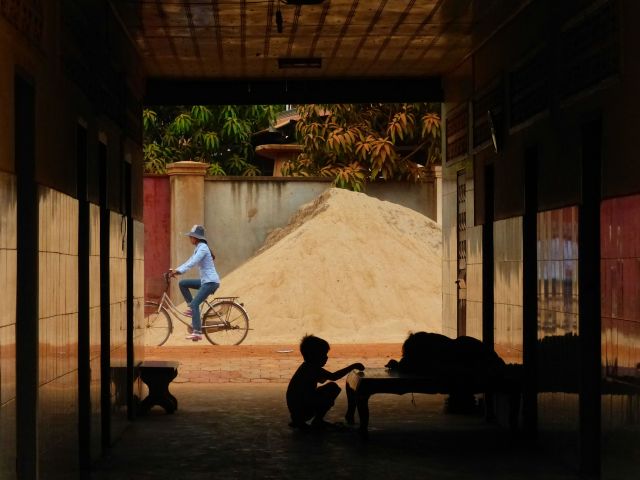 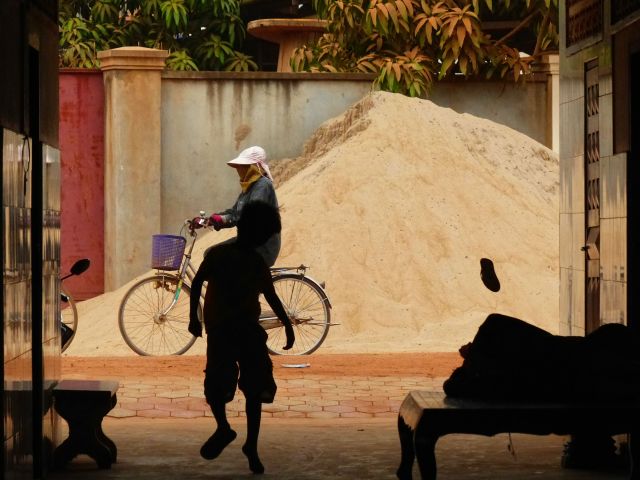 Caught him kicking his shoe off

Kampon Kdei is a one horse town. Didn’t seem like there was a lot going on besides a wedding and the old men playing chess in the restaurant were we ate lunch. The market wasn’t even bustling as they are in most towns. The weddings in Cambodia are very loud affairs. From what we can tell, a tent is set up beside the street and everything is broadcast over loudspeaker, the prayers, the music, everything. The wedding across the street was so loud, we couldn’t carry on a conversation during lunch.

After lunch, we set about fixing my bike. A little boy came to help. Chandler took apart my crank and cleaned the bottom bracket bearings while I finally patched my tire. Luckily for me, I didn’t have to pump the tire back up. Our new friend insisted upon doing it himself. 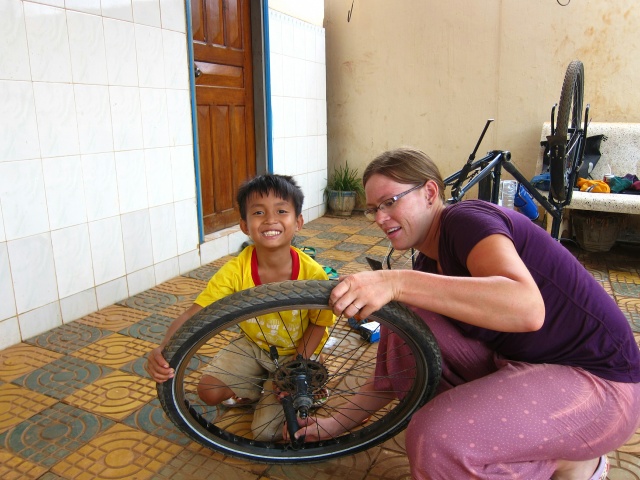 Once he realized we were willing to socialize with him, he wanted to entertain us. Chandler got a tour of the fruit trees across the street, in english, twice! He got a praying mantis for us to take photograph. That poor bug got tortured by the kid. He spread out its wings and arms for us to see. He killed ants and tried to force feed them to the bug, which it actually did participate in, occasionally also biting the kids finger. The worst moment was when he stuck bug’s head in a bottle cap full of water so the bug could have a drink.

He was forced to leave the mantis when it began raining. This was the first real rain we have seen since arriving in Asia. Puddles formed quickly and the dusty road was soon very muddy. We retreated to our room to read and play several rounds a rummy. After a while we got hungry and walked over to a restaurant. The town didn’t have any streetlights, so it was very dark. The wedding was still going on, with the knob on the amplifier welded at 11. We had a nice meal and Chan had a few beers, while we peered out into the dark with the torrent continuing, blasting away on the tin roof. At this point we awarded Kampong Kdei with the award as the “Loudest Town of All (so far)”.

2 comments on “Raindrops on rooftops”