Since we opted not to boat across the Tonle Sap, we had to ride around via Sisophon, which is located at the intersection of Highway 5 and Highway 6. 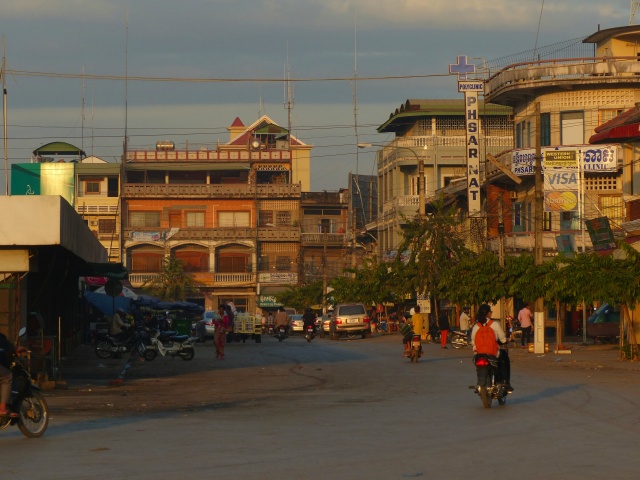 We stopped into the other vegetarian restaurant via a short tour of the city. We took a route along the river which was much more charming than the back road we had seen the night before. The east bank of the river was quite a bit cleaner and had more modern buildings, apparently the west side that we had stayed on was the old part of town. The restaurant was very busy with every table filled with local people and many people taking food to go. In appearance the place looked like any other busy restaurant including the big bowl of broth a lady was ladling into bowls of noodles, but in fact everything on the menu was vegetarian. Meat has been so prevalent in Thailand and Cambodia so far, it was a little shocking to see so many options and so many people eating here.

We had a little trouble getting out of town due to socializing again. It seems that every time we stop, someone has questions about the bikes, where we are going or have been. It hasn’t been hard meeting the locals. This time it was a 41 year old tuk tuk driver who was curious about our trip and told us about his sons and then a few minutes later we stopped and chatted with a young English teacher. 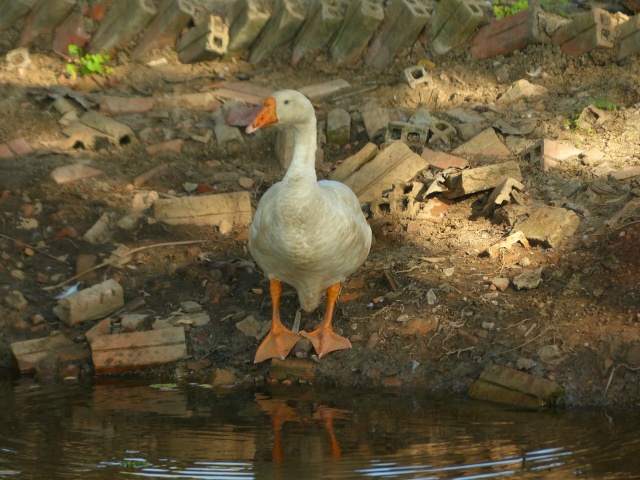 A number of exciting things happened today. First, we discovered sugar cane juice. It is incredible. The juice is squeezed out of peeled sugar cane which is hand fed through a gas powered roller press. The juice is then poured into a glass mug (or a plastic bag to go) filled with ice. The first sips were OK, but once it cooled down with the ice, the slightly sweet taste emerged. It is a very cool and refreshing drink. The stands which dot the roadside are easily identified by a bucket full of peeled sugar cane. In Khmer the drink is called something like “tuk am pow” which means the water of the sugar cane.

The second exciting thing was that we not only saw but spoke to other cycling tourists! Chan spotted a bike with panniers parked on the side of the road and slammed on the brakes. The bike belonged to a Frenchman who was cycling with his wife and 4(!) kids around Europe and Asia. They had been on the road for 8 months and were headed to Siem Reap like us. We exchanged contact info and made plans for them to host us in France when we get there next summer. It was great to stop and chat, even briefly with some other bike tourists.

I also got a souvenir today. The krama is a traditional Khmer garment that has a hundred and one uses. Scarf, bandanna, sling, child carrier, skirt, etc. While biking through a small village, I noticed a man with several different colors of krama fabric loaded on the back of his bike. I selected a purple checked pattern and he measured off about a meter of fabric, cut it off and handed it over.

We made it to Sisophon pretty early in the day and found a very nice hotel for $13. It had just opened, and we may have been the first people to stay in our room. The transaction for the room was pretty amusing: the room price was quoted in US Dollars, Chan paid with Thai Baht and received Cambodia Riel as change. We had read that Baht is readily accepted in western Cambodia, but we found that about half the time people didn’t know the exchange rate and didn’t really want to take it. We changed the rest of our Baht to Dollars at a private money changer for a rate only about 2% worse than the true exchange rate.

Sisophon was a decidedly non-tourist town. There were lots of bars, but we had a bit of trouble finding somewhere to eat. We finally found a place with pictures of noodles and egg on their sign and sat down. After some miming with the guy next to us we figured out we had to put our order in with the cook, and they would bring our food to us. Our smiles were met with the cook’s uneasy large eyes and it became clear that there was no menu, and no English (and clearly no Khmer on our ignorant end). Luckily I had taken a photo of the menu at our guest house in Pailin which was in both Khmer and English. I pulled out the camera which caused much confusion, and then laugher as we pointed to what we wanted on someone else’s menu- it worked perfectly and we had a very nice dinner. We watched some Thai PBS back at the hotel and got to bed early in preparation for our long ride tomorrow to Siem Reap.