We popped out of the tent, made breakfast and packed up. We did some final internet work and found that if we aligned things perfectly we could take the ferry to Lesvos then hop on the ferry to Athens immediately. We had read a little about cycling Lesvos, and it sounded nice, but riding around in circles seemed a little pointless to us considering we have a long road ahead of us to the Netherlands.

There was some confusion over who to pay at the campsite so we ended up having to wait until afternoon when the “trusted staff” showed up. We sat around chatting with the Latvians until then.

It should have been a quick and mindless ride to the ferry, but the highway was being seriously worked on so we ended up in the travel lane with a bunch of trucks which made things unpleasant. We opted to take the small coastal road which seemed to follow the coast, but ended up being a 10%± roller coaster ride of misery (there was crying). Some sweaty miles later, we hooked back up with the smugly moderate grade highway and bought some ice cream to cheer ourselves up. A while later we made it to the port town where we stopped at the Kipa, which is kind of a Turkish Fred Meyers. We finally found 50 SPF sunscreen on sale and proceeded to buy in bulk. 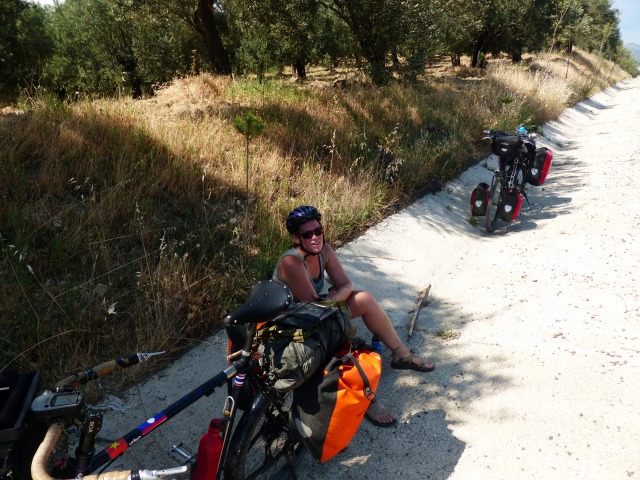 Hiding in the shade

After some halfhearted negotiation at the port (I was able to knock 20 Euros off the price with way less effort than it took to knock 10 rupees off anything in India) we found ourselves bound for Greece. Ferries sound interesting in principle, but it was a pretty boring ride over to Lesvos.

Since we had bikes and were non EU types, we ended up at the very back of the line going through customs. There was no chance that we were going to make the ferry to Athens after waiting in customs, so it was time for plan B.

We did some research back in Turkey and found out that lodging in Lesvos was WAY outside our budget. We had about an hour of light after landing to find somewhere to sleep, preferably somewhere out of the way and cheap/free. It didn’t help that Manali(SP) was a densely populated port town. While on the ferry, we saw more open ground to the northeast of town and set that as our target.

We bolted northwest blindly trusting the GPS, which took us on a bizarre and illogical tour of the steepest cobblestone streets in the entire town. I felt my chain tight and straining with the climb while even in the granniest of gears. I heard Jenny shifting up, up, up, and then a terrible crunch and silence. Her chain had blown up from the rough riding. I doubled back and fished in the repair kit for the other power link. I couldn’t find it and came up only with the spare nine speed chain. We looked at her chain and the pin that ripped out of the link. Aggravated and running out of light I salvaged the powerlink from her broken chain and slapped on the replacement. An old guy who owned the back street bakery we were in front of was clearly impressed with our preparedness and showed us the trash bin to throw the poor old chain that pulled Jenny’s bike across Asia with and after we were through, gave us repeated doses of dish soap to wash our grease stained hands off with under his spigot.

At this point the sun was literally setting and we were still in a cobblestone alley, nowhere near anywhere to free camp. We cranked hard out of the port and sped along the semi-industrial outskirts of town. I saw a single paved road on the GPS which lead out to the ocean so we followed it, but it turned out to be some sort of waste water treatment facility which huge barbed wire fences keeping us on the pavement. We turned around and saw a little side road which we followed. It turned out to be the local place to dump old parts of ruins. Tops of Greek columns and carved blocks were all stacked and numbered in the weeds in a clearing. We pushed the bikes along a sketchy path and found ourselves adjacent to an old mini traffic school training course which was all overgrown. We munched on bread and oil then waited until nightfall to pitch the tent, picked the aggressive hitchhikers out of our socks, watched the first two episodes of the new Arrested Development and fell asleep.

2 comments on “Getting into Greece”