With fairly expensive ferry tickets in hand, we were motivated to finally escape the gravitational draw to hang out a few more days in Istanbul. It wasn’t a particularly cheap place to while away time, at least by our standards, but it was a calm, beautiful city with lots of nice people and interesting things to do. We were sad to leave, but excited to see more of the country.

At 5 am, we hopped on our loaded bikes for the first time since we took off from Weishan to Dali what seemed like an eternity ago. It felt good to be back to riding, and we cruised quietly along the coastal contour of the European side of the Bosporus to the ferry terminal.

The day before we spied a McDonalds at the ferry complex so we were both dreaming of greasy hash browns and egg sandwich things on our ride over. We are both big time breakfast people and the prospect of a cheap greasy carboload to fuel our riding later in the day was tantalizing. When we drew up to the entrance and saw chairs stacked on the tables and the lights out, I went into a quiet and irrational tirade about the poor work ethic of Turkish McDonald’s workers, and slunk into a low mental place. The only other option was Café Nero, which looked a bit swank for our grubby selves. It was pricey, a small Americano was 3 euros, and small meant that the barista dumped the second half of the shot down the sink and filled the cup to the brim with water. Stunned, and with even lower morale I feebly coughed up what in Asia was half of our entire daily food budget for two coffee flavored waters and a small round pretzel looking thing that was not a pretzel. I thus declared this the “worst coffee of the entire trip”, Nescafe made with fishy tasting water included.

We were loaded up on the ferry without much trouble, taped the brake levers down so the bikes wouldn’t roll and fall over during the ride then headed up to the passenger deck. It was the nicest ferry either of us had ever been on, with assigned padded seats at small communal tables, a really nice and expensive cafeteria, flat screen TVs playing things we couldn’t understand. We snoozed for most of the 2 hours to Bandirma. We expected that the terminal on the other side would be in a city and we could grab breakfast, but we were actually just in a very small town north of the main city center. We popped into a grocer for some water, pasta, tomatoes and to the bakery next store for a loaf of bread. As we were loading our food up, the young man working at the bakery beckoned for me to come back over and he handed me two pastries which were like scones with raisins in them. Breakfast problem solved!

We started riding through the back roads of the town, but they eventually devolved into gravel which was a pain to ride on, so we steered onto the main highway. The traffic was surprising light, but there was a ton of honking. This time it wasn’t annoying though, it was all the truckers in the other lane trying to get our attention so we could return their waves. We were in good spirits and banged out a few miles but it was really hot and we were not used to cycling in the heat, so we decided to take a break. We set up our hammock on two shrubs overhanging the drainage ditch on the side of the road and took turns in it while reading in the slight shade of the two shrubberies. 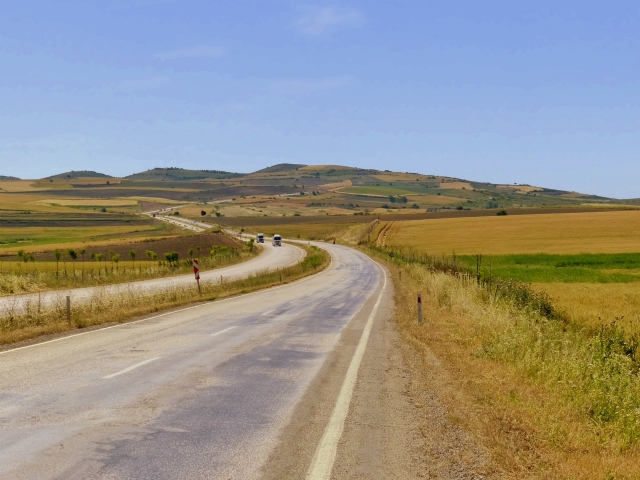 After our siesta we rode along for a little while longer until Jenny’s bike started making a really awful clicking noise. Upon closer inspection we realized that at the end of each of our chains we had lost the disc-shaped roller pieces that sit inside the chain links and allow the chain to roll smoothly over the cogs on our gears. They probably accidentally fell out when we were cleaning them in China. What should have been a simple fix ended up taking a while as it was really hot and we were out in the open and our chain tool isn’t the best. Then a guy on a motorbike stopped by to help (he was a farmer and the way he handled the chain indicated he actually knew what he was doing), but we kept dropping the tiny pieces in the dirt on the shoulder and we were foolishly trying to do this without unloading the bike. Finally, we got it back together. We repeated the process, although somewhat abbreviated the second time around, on my bike then headed off with slightly too short chains, oh well.

We started scoping out a place to camp and ended up in a small village on the coast. It had a nice beach that would have worked, but it was out in the open and a small group of kids were following us around on their bikes. Upon further inspection, we saw a bloated beached dolphin on the shore of our maybe campsite and decided it was an omen that we should keep searching. We put our faith in the GPS and meandered through a tangle of irrigation roads along what appeared to be wet rice fields which we thought was odd.

As we were about to pop back on the highway I saw a small overgrown side road and followed it down to the river bank. There was a small flat clearing where an old pumphouse had once stood. It was also overgrown with stinging nettles and these white cottony tufts which induced sneezing. It was not ideal, but it was out of sight, flattish and well those are the two best adjectives I can think of. After a maniacal revenge attack on the stinging nettles we had a nice spot to cook and sleep. We whipped up some pasta with tomatoes and cheese and passed out as it got dark.