We had a peaceful night’s sleep on the train and woke up in Mangalore. The guide book said the town had some beaches, but we were more interested in hiking and headed straight for the bus station to get into the interior. We got seats on a local bus for Madikeri right as it was leaving. The local buses are extremely cheap, but not so comfortable. As we bounce along, sweating profusely without any fans, we stopped many times to drop off and pick up passengers. The ride ended up taking 3 hours, but we noticed the temperature dropping as we climb higher into the hills.

We found a hotel no problem and headed out to find a company to hire a guide. This is something Chandler and I would never do at any other time, but transportation, lunch and guide were all available for a very reasonable price. Plus, the trails around here the area aren’t not marked for tourist, so having a guide or the ability to ask for directions is necessary.

Back at our hotel, we washed up and hopped into bed to read for a bit. At about the same time, we both notice teeny, tiny red bugs crawling around which contain lots of blood when killed. Great, we’ve got bed bugs. At this point, we don’t think we can change hotels without losing what we already paid. We are not interested in just suffering through it and waking up covered in bites. As I pack up, Chandler goes downstairs to explain the situation. Thankfully, we are able to change to another room where we search the entire place for bugs before turning out the lights. Good thing we will not be staying another night.

We met the guide and ditched our belongings at the tour company early the next morning. The owner was a sweet old guy, who immediately locked up our gear for the day. We got on a local bus with our guide and headed out of town. At the end of the line, in the middle of nowhere, we got off the bus and began walking up a really steep hill. Soon the sun was blazing down on us and we were sweating. We passed by a number of tea plantations and some coffee plants scattered in the forest as we climb higher in the mountains. Finally, we entered the forest and were blessed with shade. Our guide pointed out cardamom plants and some lime trees. 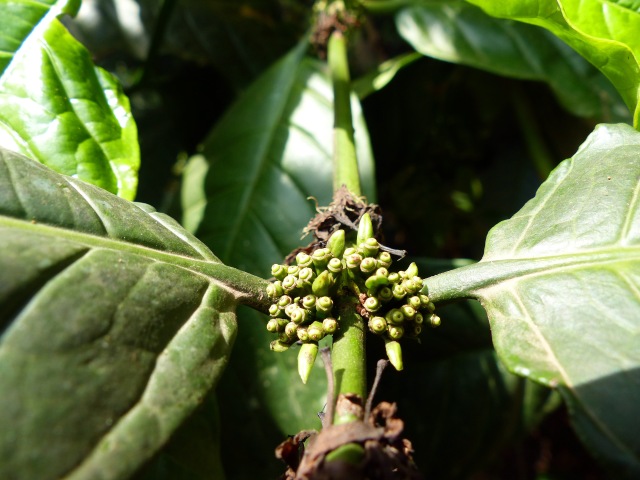 The forest thinned out and the temperature became very comfortable as we reached the ridge. The air was thick with mist and we were unable to see much of a view, but it was still beautiful. We took a few minutes for a snack before continuing along the ridge. We continued to climb higher, seeing evidence of animals like wild boar and elephants. Our guide pointed out interesting features and edible plants, including what looked like white grapes but were very sour.  At one point, as we emerged from the trees we startled a wild boar, which immediately ran away from us. This animal was huge and we were happy its instinct was not to attack. 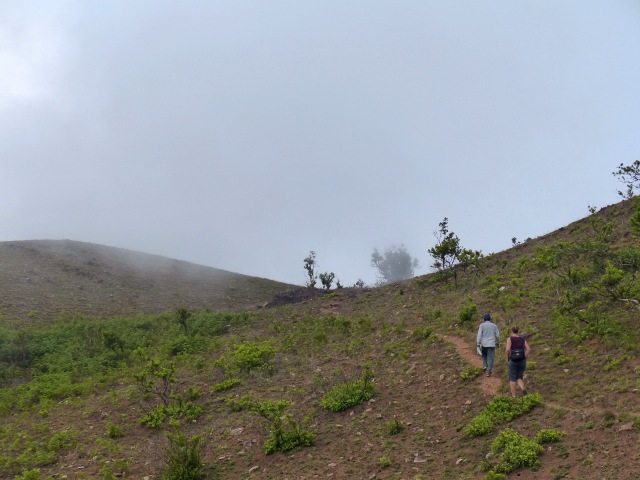 Almost to the top

After reaching the summit, we took another short break and headed down for lunch. We wandered down the ridge and passed a few farms before arriving at someone’s home. A little lady came out and showed us to her kitchen. She served us rice with white bean gravy. It was simple but delicious. She kept trying to serve us more and more and more, we had to be a little forceful to make her understand that we were both stuffed full.

The remainder of the hike wound through a neighborhood. We stopped and smelled some blossoming coffee flowers which smelled amazing. At one point we came across a wedding and we were immediately invited to join the celebration. We were photographed with various people who handed us huge plates of food, even though we said we weren’t hungry. Our guide indicated that we needed to go, but gave us no help in how we could get out of eating the food. Eventually, we were able to get the point across and left. We arrived back in town a short while later. We had just enough time to give our guide a tip, collect our things and catch a bus to Kushalnagar. The town was a little weird, but we found a hotel no problem. The hotel was pretty creepy and dirty, but after a thorough search, we didn’t find a single bedbug. We had some dosa and chai at a nearby veg restaurant, had an ice cream and went to bed.