As we set out, Chan tried to adjust his seatpost and snapped the cobbled seat clamp that had been installed back in Vietnam. That will teach him to not mess with his bike. When we pulled up to the shop, Chandler explained the situation to a young girl with a series of gestures. Together, they found a quick-release thing on another bike that would fix the problem. She then tried to get everything to fit back together, not realizing that a shim was needed, brushing Chan off as he tried to put it in. This has happened to us a number of times. Someone “helps” us, but clearly has no idea what they are doing. Eventually, Chandler was able to wrestle the part away from her and get things sorted out.

We had one more delicious Mexican meal before hitting the road. We were delighted to find a bike lane heading out of town. However, a bunch of people had decided to park their cars in the middle of it, so we ended up just riding in the road anyways. We had a pleasant time riding side by side, chatting as we passed through another construction ghost town. We had a change in routine today as we went down a big hill before starting uphill. 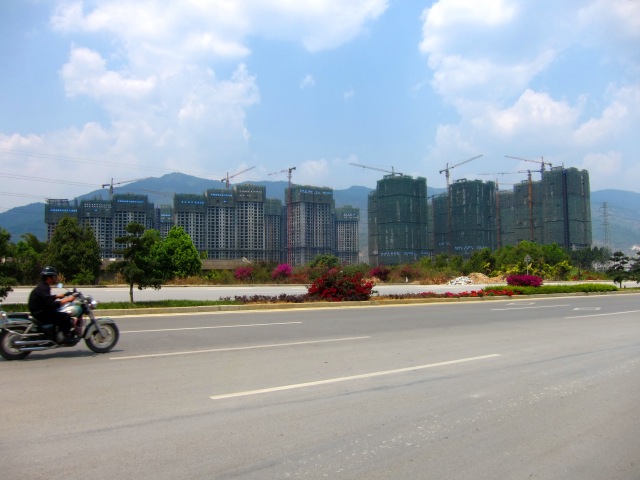 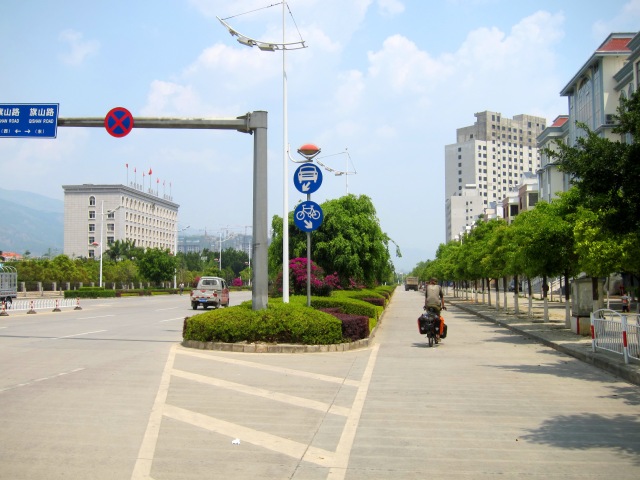 As we hit the edge of town and we found ourselves fighting for room on the road with the Saturday traffic. The road had a very small shoulder with raised lane reflectors positioned exactly where we wanted to cycle. Chandler decided to use this moment to do a little video interview. As he scanned the road with cars honking and passing too closely, I must have used every foul word I knew and I have quite the vocabulary. People drive very recklessly in China. The new wide, smooth roads encourage speed, the inexperienced drivers buzz around with a crazed selfish impatience, wildly taking over other vehicles on blind curves going uphill, passing three abreast, etc. We’ve seen some wild driving in the rest of southeast Asia, but usually congestion and crappy roads tend to moderate the insanity. It seems like there is an army of testosterone fueled 17 year old drivers set loose on the brand new expressways of China. 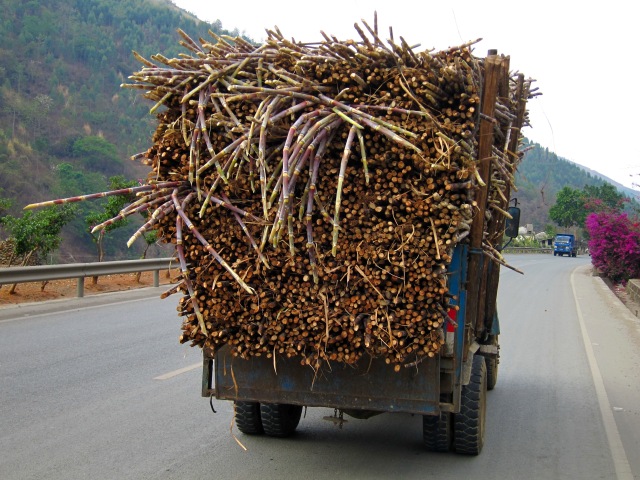 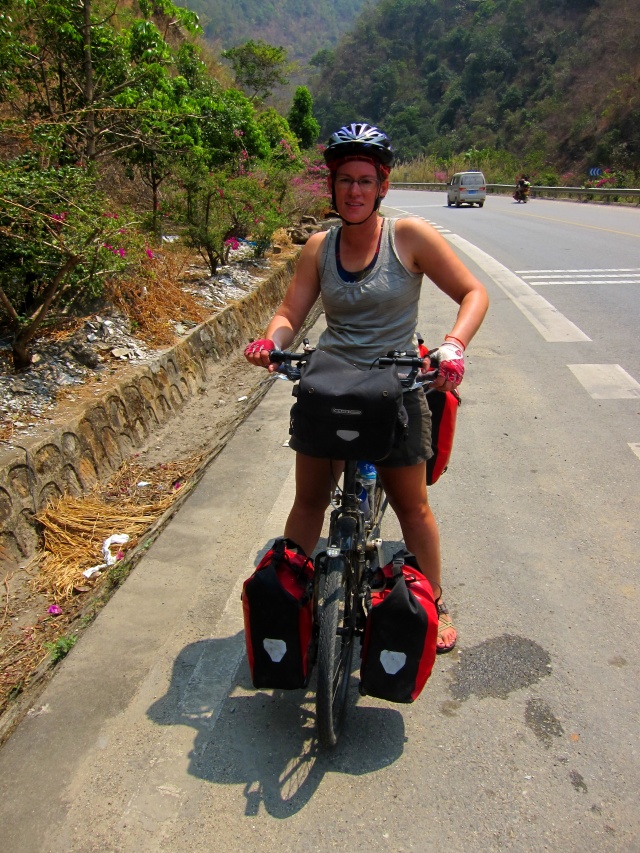 Preparing to go through a tunnel

When we started climbing the hill, our focus shifted from frustration to concentration. We passed through a short tunnel which was lit, making it less scary. At the top of the hill, we were welcomed with a huge carved mural depicting what we assumed was the construction of the Burma road. I was especially happy to see the Chinese honoring the land surveyors! 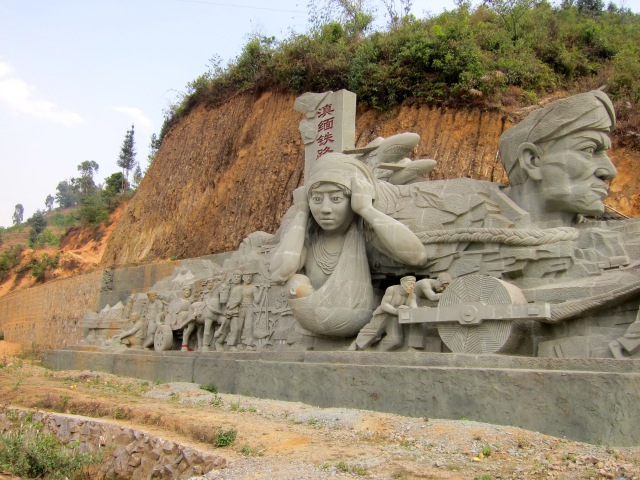 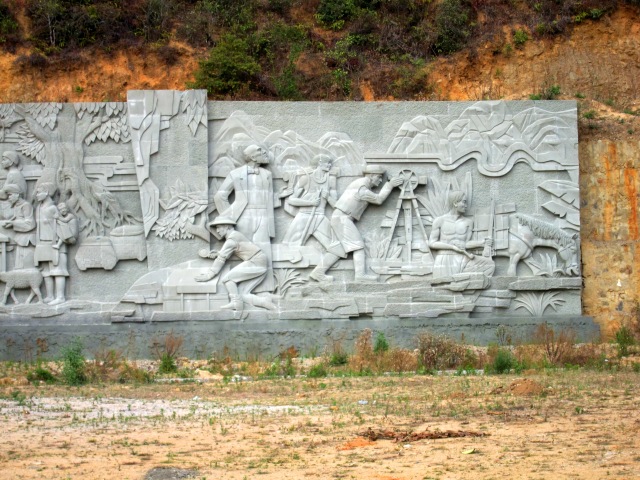 After stopping for a few pictures, we were flying down the other side into a large city. The city appeared to be brand new like most that we have biked through, but this one sported an old bridge. We didn’t have any info on this town so we biked around blindly looking for a hotel. While going up a road that took us to a residential area, I noticed a man on a motorbike take an interest in us. After turning around near some apartment buildings and searching down another road, the same man appeared again. We were becoming a little weary of him and certain he was following us, when the third time we saw him, he made an eating motion. We shook our heads no and returned with a sleeping motion. He then pointed us in the direction of a hotel and rode away, never to be seen again. Well, not by us anyways. 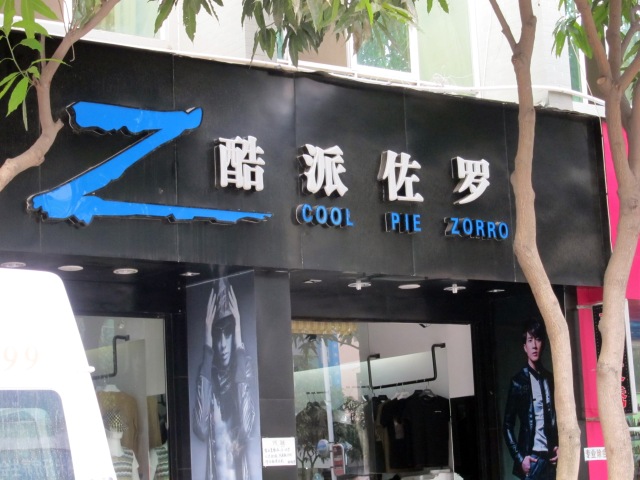 Maybe something was lost in translation

The hotel turned out to be affordable and nice. We had an enclosed shower, which is a rarity in Asia. Usually the whole bathroom is the shower, so it was nice to not have to make sure the TP was high and dry. There was also a basket of “Sensual senior underpants” for sale next to the TV. We decided to leave those alone and finish the night with ramen noodles and a Kung Fu movie. Hai-yah!