While we had discussed Chandler wearing his new suit for the duration of the trip, we decided it would be better if it got sent home along with the souvenirs we had collected so far. This ended up taking a while. There were several forms to fill out with information about everything we were mailing and its value. The woman working the desk then packed everything up for us and taped every inch of the box. Nothing is escaping that package. Hopefully it gets home in a few months. At this point it was getting kind of late in the morning.

We went back to the hotel for breakfast before hitting the road back to Da Nang. Although the hotel was pretty expensive by our standards ($20/night) they had a decent free buffet style breakfast, with fruit, fried eggs, baguettes, and best of all, peanut butter! We had a huge breakfast every morning, which gave us a lot more energy during the day and improved our moods in general.  The Grassland Hotel got a pretty bad rap on tripadvisor, but we’ve learned to take those reviews with a grain of salt, or usually disregard them completely. There seems to be a wildly huge gap between people’s expectations and what $10-$20 can really buy you regardless of where you are. Overall, it was one of the better stays we’ve had on the trip.

Having already done the route between Da Nang and Hai An once, we peddled quickly to reach new territory. We didn’t really have a plan for the day. Maybe we would stay in Da Nang again so we could do the 550 meter Hai Van pass in the cool morning or just grind over the pass  to get some distance out of the way and stay in Lang Co. We talked about our options while passing through  the north side of Da Nang that was clearly the more rundown section of town. Chandler was not inspired by the decrepit hotels we were seeing and I was not interested in conquering the pass in the mid-day heat. Eventually, we agreed to take a long break over café sua da.

We wish we had a photo of the place, but it must have been one of the more dangerous cafés in the entire world. The canopy blocking the sun was anchored to a high voltage powerline tower, with a tangle of wires leading to junction boxes adjacent to the old lady’s makeshift kitchen. The whole place was jammed in a wedge of ground about 20 feet at its widest, bounded by the busy highway and the railroad tracks, which were at about eye level when sitting down. We didn’t really process any of this until our eyes adjusted to the shade. It turned out to be a great stop though. Between deafening passes of passenger trains, the old lady kept our pint size glasses of ice cold green tea topped off, and we added ice cube after ice cube to our coffees which started out nearly as thick as molasses. (These were later voted the best café sua da’s we’d had in Vietnam) 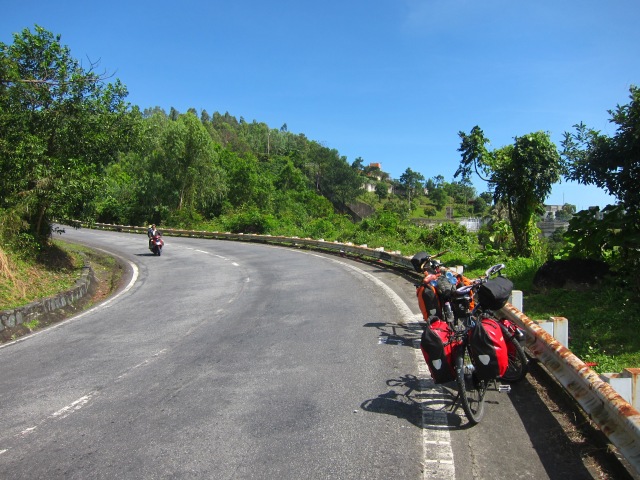 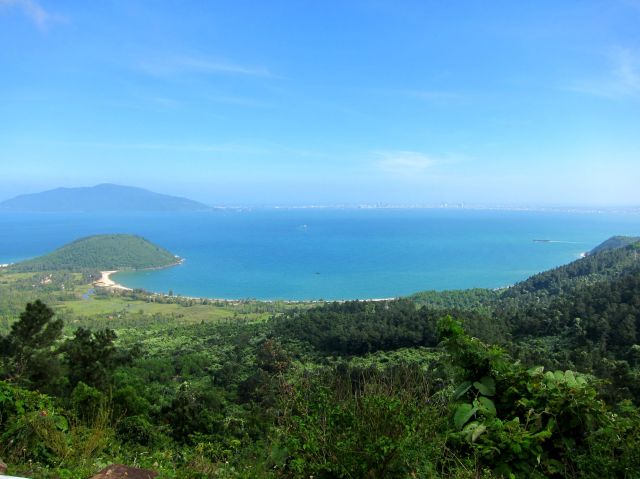 An hour later, we hit the road again to bike up the pass. The sun was burning up the sky but there was a cool breeze coming off the ocean. Hai Van was the first real pass we’d done in over a month and the first 50 vertical meters were killer. We decided to take water breaks with every 100m of elevation gain. Suddenly, the clouds came out and the traffic thinned to only motorbikes and lumbering fuel tankers since everyone else was in the tunnel bypass below. The cool and quiet really helped our stamina and we ended up crushing the pass! Motorbikes were waving and cheering us on, we felt so strong the entire time. When we got to the top, we both mentioned we felt like we could have climbed double the distance.

American bunkers at the top

Heading down the mountain

The top was beautiful but not relaxing. Immediately, peddler ladies descended, blocking our path, trying to sell us sodas, bracelets and mentos. We politely declined which got rid of most of them, but an old lady really tried playing the guilt card hard mumbling something about no babies, holding her hand out for money. We ate a quick snack of Oreos, drank some water and chatted briefly with one younger sales ladies who made one last ditch, half hearted and friendly effort to sell us a bracelet before we dove off the other side of the pass. Flying down the mountain, again we were cheered on by passing traffic. Someone actually videoed us for a while with their cellphone, which has happened a few times in Vietnam. Eventually, we joined up with the regular traffic coming out of the tunnel and biked into town.

Our plan was to cruise through town to get the lay of the land and then pick out a hotel. We saw a couple that looked promising, when a woman on a motorbike pulled alongside me and stated she had a hotel. This happens all the time in Vietnam, so I didn’t think anything of it. Normally, the places people offer turn out to be dives and we pass. We were pretty tired, and the lady seemed OK, so we let our guard down a bit. The woman took us to one of the hotels we had passed by already, which looked OK. We asked about the usuals, hot water, wifi, a place to store the bikes, etc and she said yes they have everything and the price was right. It wasn’t the cleanest place, and it smelled a little bit, but we were exhausted and ready to shower and chill out, so we took it.

Once Chandler agreed to the room, her demeanor changed instantly which was a bit weird. Chan asked the price again and she raised her original quote by $5 “because of Tet”. Chan was a bit pissed at this point, as we’d already partially unloaded the bikes and locked them in another building. OK, we’ll go somewhere else. She agrees to the original price and helps us carry our bags to the room. Now she says, I come back and give you massage? She claims to be number one in town. No, I need a shower and to eat first. OK, she has a restaurant where we will have dinner. Hmm, sure, whatever. Please leave our room now.

We take showers, relax for a bit and forget about the odd interaction with the woman. The owner of our hotel in Da Nang raved about the cheap seafood in Lang Co, so we decided to walk around town and see what was offered. About 5 minutes away from the hotel and someone is honking at us and yelling for us to stop. Crazy lady has tracked us down on her motorbike and is demanding that we eat at her restaurant. We try and tell her we are just going to a walk to see the town, but she says we have to go back now and we can walk after dinner, in the dark. At this point we realized we had checked into the psychotel. We managed to get rid of her by saying maybe we’d come back later. She seemed pissed and we were now a little worried about our bikes and gear.

At this point, we really want nothing to do with her, the hotel or the restaurant. However, she has our passports (which is required at every hotel because they have to report to the police every night who is at the hotel) and we both get the feeling she is the kind of person who will try and sabotage us if we don’t play nice. We didn’t really find any great looking restaurants and as the sun was setting, we headed back to the hotel to grab some dinner. Crazy Lady was not around thankfully. The rest of the hotel staff were really very friendly and made us a nice dinner of noodles and vegetables that turned out to be really cheap. But where is Crazy Lady? At this point, we want her to see us eating at her restaurant so things will go smoothly in the morning when we need to leave. Finally she shows up on her motorbike, probably searching the streets for us, and sees us finishing dinner. 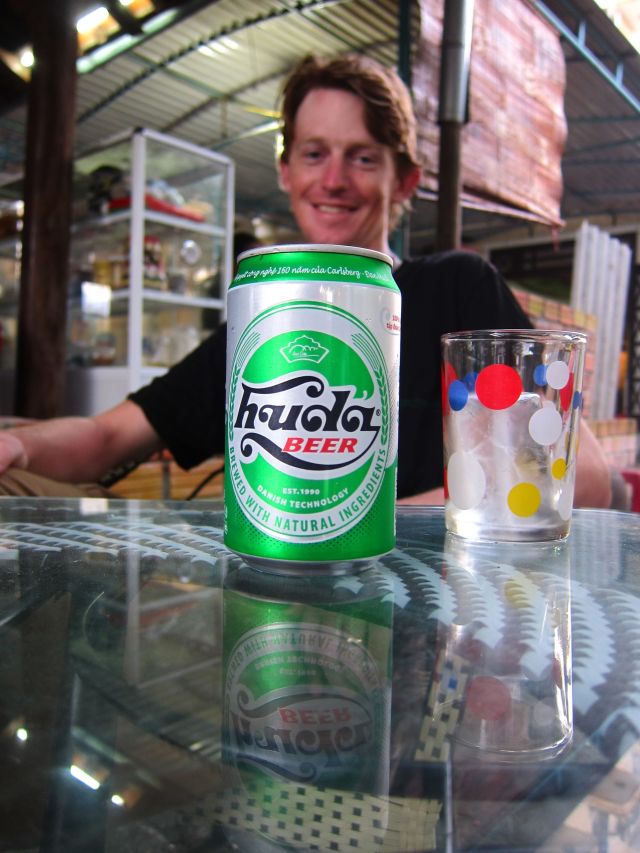 She invites herself to sit at our table and is now back to being happy Crazy Lady. She understands that we will be leaving early in the morning and since we already paid, she says she’ll give us our passports back that night. She made some casual conversation about our route north that actually turned into a devious attempt to sell us a map. Then she starts asking about the massage again, which once I decline, she decides to change her mind about the passports and will give them back after we eat at her restaurant in the morning.

Not wanting to deal with crazy any longer, we declare it bedtime. She then tried to sell us a bracelet of course. It was only 7pm, so we turn off the lights in our room and watch the new James Bond movie with our headphones so everyone will think we are sleeping. Morning cannot come soon enough. Moral of the story: Do NOT stay at the TRIEU VY Hotel in Lang Co.