Hoi An is home to hundreds of tailor shops. It is the place to have custom made clothing done in Southeast Asia. We went back and forth about having clothes made for us. I read a lot of blogs prior to coming to town to learn about people’s prior experiences. I had settled on Mr Xe for a suit for Chandler and either A Dong Silk or Miss Forget-Me-Not for myself.

We spent the morning wandering around town looking for the cloth market as the temperature got warmer and were constantly hassled by people. “Hello, you buy something.” I was never able to find Miss Forget-Me-Not in the cloth market. Next, we went over to A Dong Silk, which quoted me $80 for a basic dress. This was quite expensive. Haggling is customary here, but we had grown weary of the wildly overpriced initial quotes on everything from fruit to dinner, which required sometimes less than good-natured back and forth to settle on something “reasonable”. I wasn’t in the mood to try to get them down to around $40 which was more of a fair price. I’m not great at haggling either, and Chandler was getting frustrated with my fear of playing hardball with the sales ladies. We tried another shop but they also gave a quote of $80 after we spent a half hour describing the dress idea I had. They also kept trying to get me to have it made in a fabric that I didn’t like. As we walked out the door, the price started to drop. With each step $10 came off, $70, $60, $50. At this point we really were not having fun, so we decided to skip the whole thing and go back to the hotel.

Then we walked by Mr Xe’s shop and he had some shirts on display. An assistant inside caught us looking and pounced. They offered to make Chan some shirts for $16, and the fabrics looked nice. Of course they also wanted him to have a suit made, and made a pretty reasonable offer of $120. The prices were pretty much in line with what we had read they should be, so he agreed. At this point, Mr Xe himself made an appearance to measure Chan. He had Chandler remove his shirt and took about 37 different measurements twice. Chan was then whisked away on a motorbike to a small sewing room full of young men sewing suits, where the head tailor there independently measured him again. 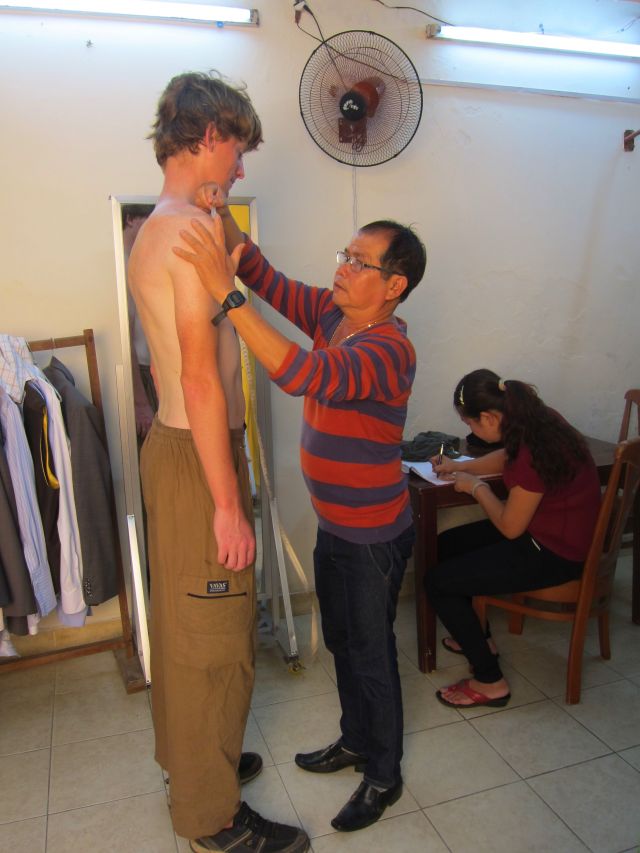 The whole process took about 20 minutes and were told to come back the next day at 2pm for a fitting. Feeling in much better moods, we headed back to the hotel to escape the heat. The temperature becomes bearable again around 4, just in time for a walk about town before dinner.

Hoi An is also known for it’s silk lanterns. Every street was decorated with them. They were especially nice all lit up at night. With Tet celebrations coming to an end, we also saw many people dressed up. Many of the women wear traditional clothing everyday, but what we were seeing must have been their formal wear.

Dinner was at a little Vietnamese place by the river, nothing amazing unlike dessert. There are a number of cafés with delicious looking treats and we could not resist.

The remainder of the evening was spent wandering around trying not to buy everything. 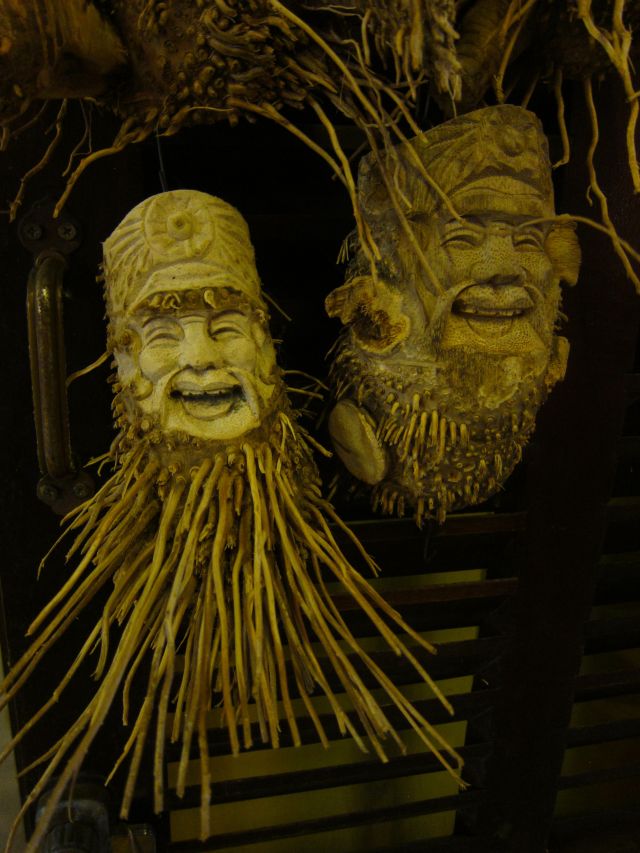