We got up at 630 so we could have breakfast and be ready to get my shoes early. The girl who was bringing them, Cana, was supposed to arrive at 730. I called her at 730 and she said she would meet me at the bus station that had her shoes. She didn’t sound very happy about the situation and I was a little nervous about meeting her. We said goodbye to Leonie, promising to email when we get to Amsterdam and headed out.

When we got to the station there were a lot of people vying for the single attendant’s attention. Somehow, I manage to stand out and got helped pretty quickly. The guy called the hotel and figured out the situation and told me to come back in 15 minutes. After 40 minutes, still no shoes and no Cana. We were beginning to feel that we might end up spending another night in Dalat. Then suddenly, I was given her shoes, she showed up on her motorbike and we made the swap. Success!

She gave us directions to a couple stores where we could pick up packaged goods as we were planning on camping that night. After making a few purchases, she showed up at the store and invited us to lunch. At this point, it had been a while since we had breakfast, so we decided it would be a good idea to refuel. Cana ended up being totally cool and we had a pleasant meal with her.

Despite such a late start, we decided to see how far we could bike. The biking out of town was a bit painful, hot and hilly with lots of traffic but we found ourselves on a newly paved quite road pretty quickly. The day turned out to be very nice. There was a constant breeze which was cool, I never had a chance to overheat. We were feeling strong and had no problem with the hills we encountered. 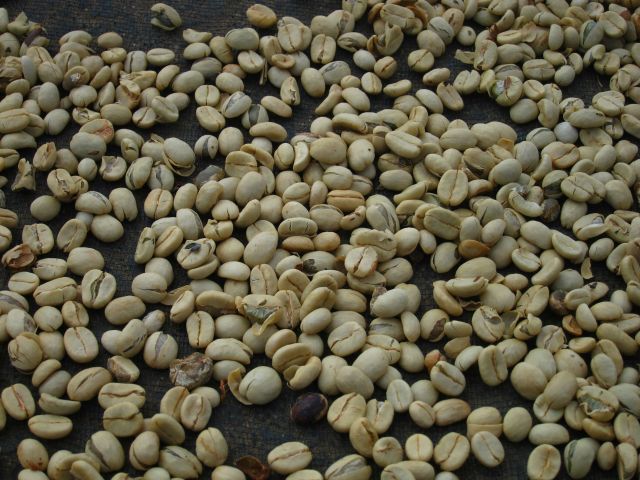 Coffee beans to be roasted

A pretty big pass that topped out at 1600m was coming up, but at 330pm we decided to set up camp and conquer the pass the next day. We turned onto a dirt road and found a cleared area in the woods. It was a perfect camping spot with big trees for Chan’s hammock and far enough from the road that it was very quiet. We set up the tent, I blew up the sleeping mats and we settled in to read.

About an hour later, I heard a noise that was familiar enough that I got a little alarmed.

“Chandler, what’s that sound?”
“Uhh, sounds like a fire”
“Doesn’t it seem a little loud?”

So, we walked down the hill looking into the valley where the noise we coming from. Sure enough, we saw a huge billow of smoke and the noise got even louder. We discussed our options for about two minutes before realizing the wind was blowing towards us. In that short period the whole valley had filled with smoke. Time to pack up.

At this point, it was 500pm and the sun would be setting soon. We went around a few more bends in the road and found a hill with road on three sides. We figured this would be a good buffer against any fire danger. We hustled to set up camp as the sun was starting to set. We now had a good view of the fire we had just left behind and the fire on the other of the valley ahead of us.

Fire in front of us

Chandler set up his hammock again and I blew up the sleeping pads again. We both laid down to read when we heard a new noise. A motorbike coming up the hill towards us. Two boys had come to enjoy a bottle of something.

We hoped they would drink their something and leave. No such luck. They came over and asked for a lighter, then decided to bring the party over to us. They lit a fire with the dry grass on the ground and insisted Chandler take sips of their drink, which turned out to be rice liquor. We figured we would be friendly and just let the fire go out and they would leave. Nope. They started it back up. One of the boys was entertaining and very nice, we learned some Vietnamese and taught him some English. The other boy was stupid and had too much to drink. He would wander off to pee or puke and end up falling into the brush. At one point, he grabbed some flaming grass and began running around with it near our tent. Our tent is made of nylon and would melt in an instant if he caught it on fire. I ended up following him around stomping out sparks.

Chandler kept asking them where they were going and when, trying to get them to leave but they didn’t get the hint.

After they finished their booze, they finally left with the drunker of the two driving. While we were happy to see them go, we hoped they made it home safely and also didn’t come back. We put out the fire and got into the tent to read. We kept imagining that any noise we heard was the boys coming back to “hang out” again.

Eventually, we fell asleep. What a wonderfully, cold night it was too. We had to get out our down jackets.

5 comments on “What’s that sound?”