Today, we didn’t really have a planned destination, we were just heading East along the coast. We broke down camp pretty quick and left just after Mr. Satellite started blasting Sunday morning programming from his beach front campsite.

After a few miles, we stopped for breakfast. The usual omelette and rice. We both slather it with the most delicious chili sauce that all the restaurants have here. Chili peppers in fish sauce is always on the table too. While the peppers are delicious, they give me a stomachache so I skipped them while Chandler did not.

The road along the coast was nice and flat. There was a breeze the entire time, so even without shade, it was comfortable riding. We were moving along pretty quickly when Chandler slowed down and stopped in the shade. He wasn’t feeling well.

After his wave of sickness passed, we continued riding, taking it a little slower. When we reached Laem Mae Phim, a beach side town, Chandler had to stop again. We had covered 20 miles already so I made the decision we should stop for the day. With his stomach being out of whack, there is no need to push it too far.

We checked into a decent resort and relaxed for an hour in the air conditioning during the heat of the day. After a little bathroom break, Chandler felt better and we went out for a fruit shake and ice coffee. We meet a retired Norwegian couple on holiday and spent several hours socializing with them. They generously shared their fruit with us- we tried a bunch of stuff we had never had before including some red watery fruit that tasted like very sweet red bell pepper.

We spent the evening strolling along the beach and taking pictures. We broke our usual dining tradition of eating at Thai restaurants and stopped in at a western style sports bar with British soccer playing on a big screen. They ended up having a most amazing thin crust pizza that rivaled a lot of good pizza we’ve had in the states. It was pretty small but we enjoyed a little taste of Western food again. 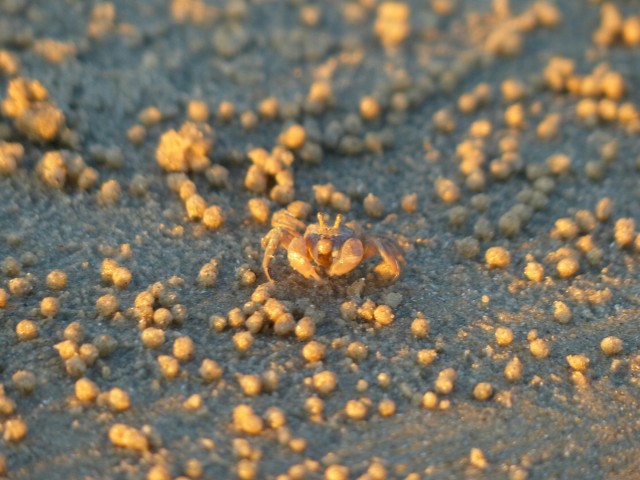 Fishing in the sunset

3 comments on “Along the coast”