We spent the first day in Sangkhlaburi relaxing and catching up on emails and the blog. We found an excellent cafe that served real coffee rather than the Nescafe stuff which is usually what passes for coffee here. Our plan was to leave the next day and go back to Bangkok, but we saw a flyer on the door of the cafe at changed our minds.

The Baan Unrak home and school is a place for Burmese refugee women and children. The kids have no papers and are therefore not allowed to attend Thai schools. Two didi’s or nuns came to Sangkhlaburi and opened the home and school to help them out. The school has grown so much that one of the nuns’ home is being used as a classroom. A new building is being built to house the nun and several disabled children.

The superstructure of the building was constructed with steel and concrete blocks. The non load bearing interior and exterior walls were being built out of mud bricks. We were pretty curious to see the project so we figured we would stick around to help out. It was a really awesome experience and we were happy to help a great cause. Plus, the school uses Montessori methods and all the food served there was vegan, so how could I not help.

We helped make mud, bricks and built exterior and interior walls. The mud is a mixture of local clay-rich soil mixed with rice hulls for some tensile strength and water. The mud is then put into a mold to form the bricks, the mold is slipped off and the bricks are left to dry for several days. Once dry, the bricks are smoothed of rough edges and debris. The same mud is thinned with water and then used as a mortar when constructing the walls. We were also given a lesson on making “cob”, a mud, sand and straw mixture. It was incredible how strong the cob was. The cob was used at the end of the walls, to bond the walls to the wooden door frames.

A Canadian named Dan who has lived in Thailand for a while was running the show. A few other volunteers were helping Dan with the construction including a group who bussed in from Bangkok just to help out for a week. We felt bad we couldn’t stay and help longer, but we had plans to head east of Bangkok to continue our ride to Cambodia before our visas run out! 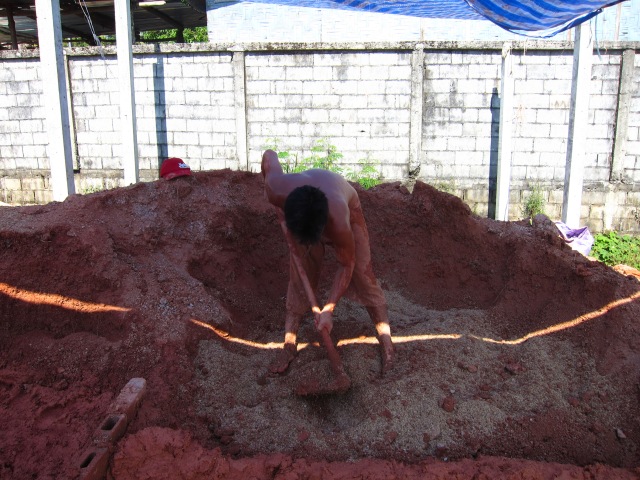 The next day we wanted to take a bus back to Nam Tok then catch a train to Bangkok. We could take a bus the whole way, but we figured a train would be more fun, and we wanted to see the Hellfire Pass Memorial which was on the way. We got up early to go to the Mon side of town for breakfast. Chandler had read about Roti Ong, a roti filled with chickpeas, onions, garlic and spices. After some searching we found them in the main marketplace. They were awesomely delicious. 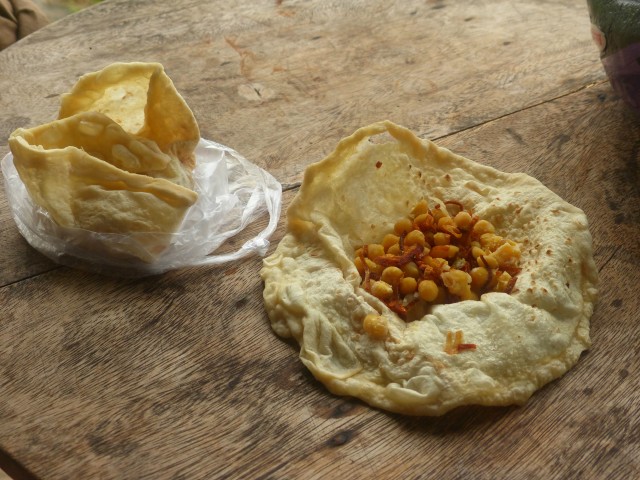 We then headed to the the bus depot and tried to buy tickets but the agent wasn’t sure if we could take the bikes. When the bus arrived it was clear we weren’t going. The undercarriage was completely full of cargo. So, we went over the second class bus depot, to find out the 9am bus wasn’t running and that we should come back at 1:15.

We hung out, read, did laundry and had fruit shakes. We got to the bus depot at 12:50 only to find out we still weren’t leaving. The bus had either already come and gone or wasn’t coming at all. It was a frustrating day, but we ended up glad we could spend one more day in Sangkhlburi, which has a very nice laid back vibe. We went back to the guest house for another night and hoped we could get on the 6am bus out of town otherwise we’ll be biking up our favorite hills.