The morning started with instant coffee and a hardy meal of rice and omelette. It was then time to hit the road. We were able to take a “closed” paved road from the park to a fork in the road. The way we came was about 4 miles or we could take the 1.5 mile shortcut the GPS was suggesting. We opted for the shortcut.

Of course it was uphill the whole way and on a narrow little trail I’m sure only the locals use. It was extra gravelly, meaning I had to walk my heavy bike up most of it. But in the long run, it did cut out some hard miles of steep ups and downs. 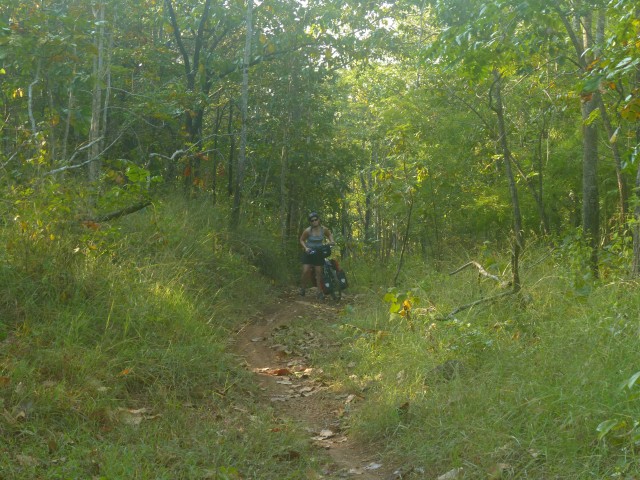 Not the happiest camper

We had been warned that the steepest sections of the road were paved and right when we finally connected with the main road, it was paved with concrete. Oh no. It started out gradually steepening, but then suddenly the road seemed to go vertical, which continued for a kilometer or so.

I didn’t know if I could handle another monster so early in the ride. I noticed I need a few miles to warm up before I can efficiently go up steep long hills. Luckily, this was a short hill with a nice long flat portion at the top to cool down on. The road was nicely shaded by jungle on either side. We took a little break to drink water and Chandler said based on the map we had another 300 meters of vertical before we were on top of the plateau.

I kept waiting for another giant hill, but it never came. Even the paved sections weren’t too steep. I did see this guy though. Anyone want me to big him home for you? Thank goodness for zoom. For scale, its legs were broader than an outstretched hand. Yikes.

Being on the plateau was wonderful. Not too humid or hot. We had no problem riding the entire day. The only thing we were wishing for was pavement. Riding on dirt roads all day is definitely an arm workout, and pretty dusty when a rare car would come by. 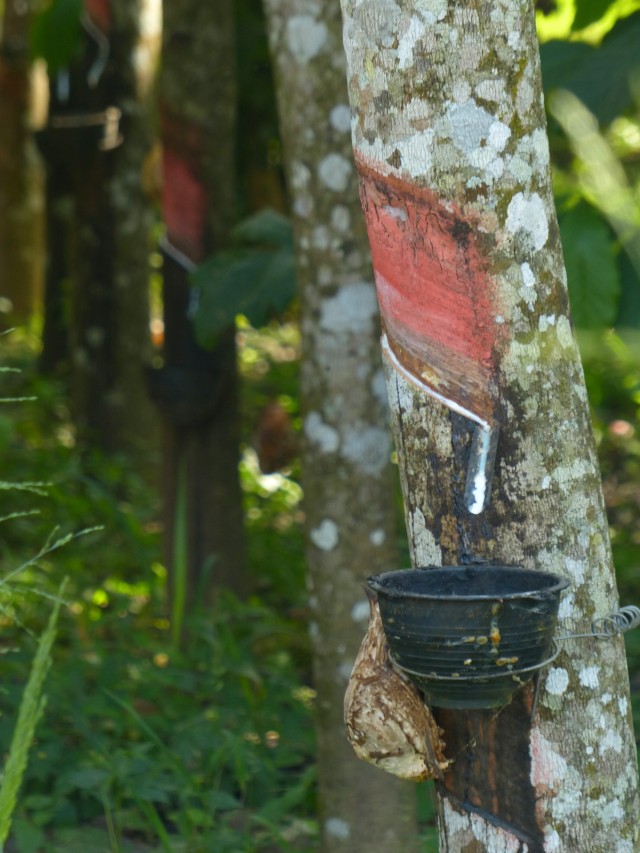 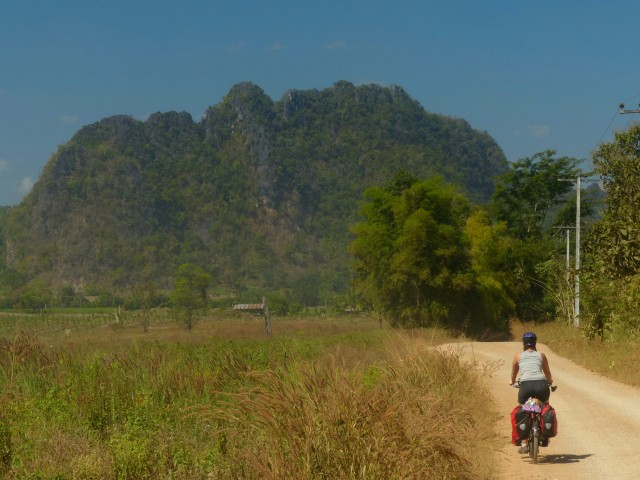 We didn’t really have a plan for where we were going to sleep except at one of the national parks. We got to the visitor center of a park with lots of caves. About ten people came out to greet us. They gave us cold water, maps and a place to rest. It took two of them and the two of us about 20 minutes to figure out their park was closed and there was another park up the road that was open. They showed us pictures of the inside the caves including one of a giant stalagmite that is “#1 in the world, 62 meters.” The caves are only open in March and April.

We finally got to the park that was open and were escorted to the area we could camp. The park staff tried to tell us they would put our tent together for us. We politely declined which led to much confusion. Four of them looked on worriedly while we set up our tent. They gave us pillows and blankets. They also thought we were crazy because we weren’t cold. We were clearly the only visitors at the park.

Chandler went down to check out the waterfalls while I relaxed in the tent. While he was swimming with a few locals in one of the pools he noticed a park ranger watching from the edge of the jungle. Chan walked down the river to the next waterfall and the ranger followed, but kept his distance. A bit weirded out, Chan asked him where the tallest section was. The ranger then proceeded to sprint down the river with Chan barely able to keep up. After a very rapid tour of the rest of the falls he led Chan back to the road and left abruptly. The whole thing was a little strange.

Anyways we met another sweet stray dog to end the day.

3 comments on “I dream of pavement”