The goal of the day was to get the floor of the cabin done. Chandler, Tayler and their dad, Steve got started on framing it. Jeanne, Chan’s Aunt Beth and I did some black Friday shopping at the local bookstore. I won the award for most money spent with a whopping $10 on new wallet for Jeanne and myself. 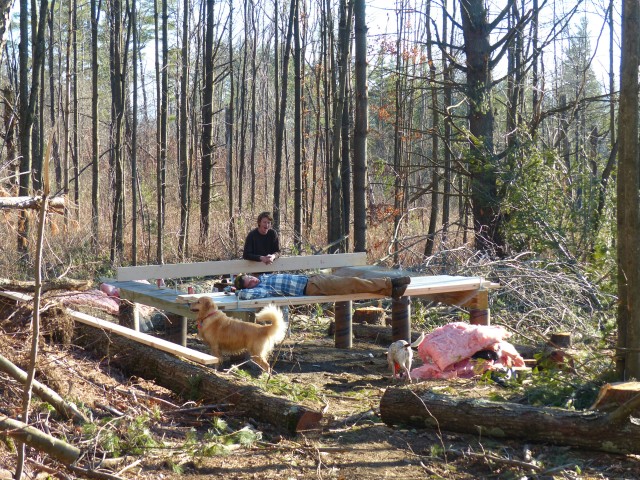 After lunch, it was time to put the insulation into the floor. This went quickly with Chandler, Tayler, Jeanne and I all working. By the time that was done, the floodlights were on a it was starting to sprinkle. Next step was placing plastic down on top of the insulation and stapling it to the frame.

The guys worked alone today. They finish screwing the plywood down for the floor, than began on the walls.

Only 2 more walls to go

Things seemed to go pretty smoothly for the guys considering it was snowing. They were able to get three walls up!

I stayed inside and began packing for the bike trip. It is a little tricky fitting everything into boxes that fit airline requirements.

Another busy day. The guys finished framing and sheathing the last wall. They were also able to start framing the loft floor. It probably helped that it was a sunny and slightly warmer day. 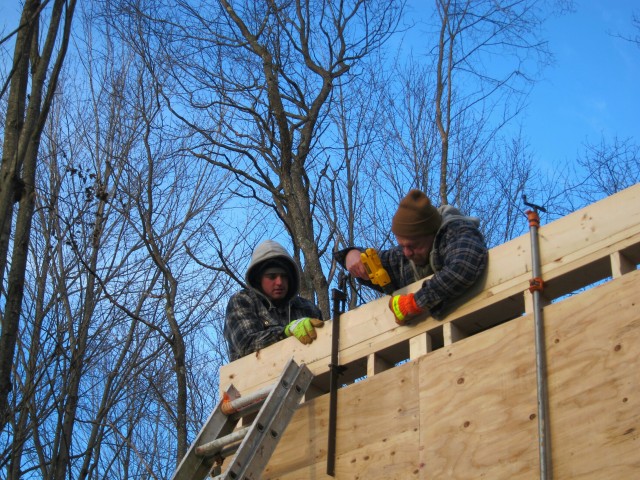 Sunset from the loft

Jeanne and I stayed inside again and made the last box for the trip. I ran a few errands for the trip, contacted the hotel in Bangkok and made a list of last minute items. At this rate packing will be done tomorrow and the first floor of the cabin could be done by Wednesday.

2 comments on “The cabin continues”